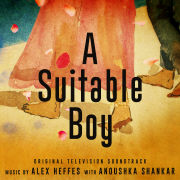 A Suitable Boy tells the story of spirited university student Lata Mehra as she comes of age in North India in 1951, at the same time as the country is carving out its own identity as an independent nation and is about to go to the polls for its first democratic general election.

The series was produced by the award-winning London studio Lookout Point and is currently available to watch on BBC iPlayer in the UK, and on Netflix in all global territories, except Canada, the U.S. and China. The DVD will be available from 26th October.

The score was composed by Alex Heffes with Anoushka Shankar, world renowned sitar player. Previously working with Mira Nair on her 2016 Disney Film Queen Of Katwe, Alex knew how important the music score is to her. Says Alex of his work with Mira “music flows throughout Vikram Seth’s book so we discussed very early on how to tie the original score into the very authentic music world of India that had been captured on screen and how to create a musical language for the score that weaves between the world of Classical Indian music and the world of film music… careful consideration was given to how to integrate orchestra into the Indian musical world, often having to learn to follow the phrasing and bending of the sitar.”

In search of character’s music themes, Alex arranged experimental sessions with some of the UK’s best classical Indian performers, combining tabla, mridangam, kanjeera, ghatam and many other percussion instruments with bansuri (Classical Indian flute), tanbura and the sitar. Early on, the decision was made that the sitar would be Lata’s ‘voice’. Says Anoushka “It felt important to establish Lata’s theme early on, and Alex and I found an organic collaboration on this piece. I first sent him an idea for the main theme, knowing it would have the scope to be played and orchestrated in both intimate and sweeping, joyful and sorrowful settings, and Alex immediately understood and it developed so beautifully.“ For Kabir they used the bansuri, played by acclaimed indian performer Ashwin Srinivasan and for the character of Amit, the solo violinist Philippe Honore provided the musical voice. For suitor number three, Haresh, a variety of pitched Indian classical percussion such as clay pots, mangeera (hand cymbals), ghungroos and morsing (jaw harp) was employed, played by percussionist Sanket Naik.

Says Mira Nair “The three of us (Mira, Anoushka and Alex) approached several Indian artistes. Ashwin Srinivasan, the great flutist, plays throughout the soundtrack. Namit Das, who also acts as Haresh Khanna in A Suitable Boy, is an extraordinary singer who composed the boatman’s song as the lovers crossed the Ganges. Gagan Dev Riar, who also acts in A Suitable Boy, made a beautiful song of longing for the widow in the village scenes. We were lucky to get the great maestro, Ustad Shujaat Husain Khan, the son of the legendary Ustad Vilayat Khan, to perform ‘Jhinjhoti’ and ‘Khamaj’ on screen in two concerts. The syncretic nature between traditional Indian sound and the Islamic influences that had arrived through Iran, Turkey, and Pakistan, which was then called India; all of this confluence can be experienced in the music of A Suitable Boy.”

Executive Producers on the series were Andrew Davies, Mira Nair and Vikram Seth; Faith Penhale, Laura Lankester and Will Johnston for Lookout Point; Lydia Dean Pilcher and Aradhana Seth (who also produce); and Mona Qureshi and Ayela Butt for the BBC. The series, which is being distributed by BBC Studios, was filmed at a number of locations across India including Lucknow and Maheshwar.

CD2
1 The Railway Theme
2 One Loves You
3 Your Parakeet Is Well?
4 Are You Making Fun of Me?
5 Farewell to Rasheed
6 Are You A Lipstick Girl?
7 Are We French Now?
8 Dil-e-Nadaan - Kavita Seth
9 Make Lata Love Me
10 I Can Make Any Shoe
11 Think Beyond Your Friends
12 Fluke of A Catch
13 Christmas In Prahapore
14 Free India’s First Election
15 Raag Jhinjhoti - Shujaat Husain Khan
16 Raag Lalit
17 Maan In Turmoil
18 Loss
19 The Fever Bird
20 Maan In Prison
21 An Unfortunate Accident
22 Love Has Run Its Course (Mehfil Barkhaast Hui Duet)
Kavita Seth & Sharvari Deshpande
23 A Suitable Boy
24 Lata Chooses Her Suitable Boy
25 Monkey Wisdom