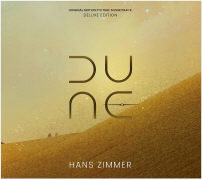 In association with WaterTower Music, Mondo is proud to present Hans Zimmer's BAFTA Award-winning score to Denis Villeneuve's incredible sci-fi epic DUNE. Mixing more traditional electronic and orchestral elements with Cubase instruments created especially for this project and fused with female voices singing in a language developed by Zimmer himself. The result is nothing short of jaw-dropping. It's otherworldly and completely enveloping, Much like the sands on Arrakis. The music here is vast, open and sprawling but at it's core is an emotional depth few other composers come close to.

Forty years into his filmography, Hans Zimmers experimental soundtrack for 2021s Dune is among his most ambitious, at least in terms of components; while conceiving the sci-fi score, he said he wanted it to include sounds that no one had heard before. The resulting 75 minutes of material corrals orchestral, rock, and folk instrumentation -- including bagpipes, an instrument thought to date back to ancient Egypt and documented in Imperial Rome -- with natural and distorted vocals, synthesizers, electronic noise and effects, and invented instruments. Among the latter are a 21-foot horn, versions of scraped metal, and an instrument made of Inconel 718, an alloy used in cryogenics and space travel. Many of these were the creations of international collaborators and recorded remotely due to an ongoing pandemic, as was much of the score. "Dream of Arrakis" starts things off with a distant, sustained tone and glittery, high-pitched metallic clinks before moving through segments of eerie, distorted chanting, buzzy electronic noise, and heart-racing drums. The less chaotic "Leaving Caladan" opts for a drone-accompanied rhythmic rock combo replete with drum kit, without leaving any ghostly atmosphere behind. Effects suggestive of wind, whispering, and granular noise are common throughout the soundtrack. Later entry "Armada" drops audiences into a succession of shimmery sustain, sporadic stomping drums, spectral voices, and ambient noise before a wall of synths enters alongside what sounds like brass, electric guitar, demonic gurgling, and full-voiced harmonic chanting -- not to mention the heraldic bagpipes and animal horn-like horns. The glitchier "Ornithopter" disturbs with deep, whirring drums, mechanical noise, bent pitches, and distorted ululation. Though there are some melodic passages on tracks such as "Gom Jabbar" and "Ripples in the Sand," which include soprano vocal segments, the score is largely noise-based, and ominous from beginning to end. While perfect for the film -- and even groundbreaking -- it may not be much fun to listen to on its own for those outside of the experimental and sound design sets. ~ Marcy Donelson