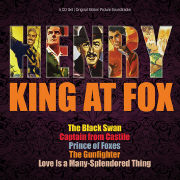 Kritzerland is proud our new CD release - a 5-CD set, including the world premiere release of The Gunfighter, new masterings, and a hugely expanded presentation of Prince of Foxes:

Composed and Conducted by Alfred Newman

Henry King was one of Fox’s busiest directors, a mainstay at the studio, who made a whole slew of terrific films during his long tenure there. He began directing in 1915 and continued for decades thereafter. He introduced Ronald Colman to American audiences, discovered Gary Cooper, Jean Peters, and Tyrone Power, and gave Fox some of its most prestigious pictures, not to mention biggest hits. He was nominated for an Academy Award five times, but never won. He did have the honor of winning the very first Golden Globe award for directing, and in 1956 he received a Directors Guild of America Lifetime Achievement Award.

He worked in just about every genre and excelled at all of them. Just take a gander at even a tiny portion of his films and marvel at the breadth of his work: In Old Chicago, Alexander’s Ragtime Band, Jesse James, Stanley and Livingstone, A Yank in the R.A.F., The Black Swan, The Song of Bernadette, Wilson, A Bell for Adano, Captain from Castile, Prince of Foxes, Twelve O’Clock High, The Gunfighter, David and Bathsheba, The Snows of Kilimanjaro, Love Is a Many-Splendored Thing, Carousel, The Sun Also Rises and on and on and on. As King said in a 1978 interview, “I’ve had more fun directing pictures than most people have playing games.” King was one of the thirty-six founders of the Academy of Motion Picture Arts and Sciences, and his films received seven Best Picture Oscar nominations. By all accounts he loved the actors he worked with, and eight of them were nominated for Oscars for their performances in his films.

For this Henry King at Fox set, we’ve chosen five films, all of which were scored by the brilliant Alfred Newman, the long-time head of the Fox music department, composer of some of the greatest film scores ever written, and the winner of nine Academy Awards.

Based on the 1932 novel by the great Rafael Sabatini, Henry King’s film of The Black Swan was a Technicolor swashbuckler with enough swash and Technicolor for several films. Alfred Newman really delivered the goods, composing a score filled with great melodies, great action music, not to mention passion and romance, a robust full-on buckle and swash Technicolor delight that perfectly captured everything in Henry King’s wildly entertaining film. Newman’s classic score was nominated for an Oscar.

For this release, The Black Swan was completely remastered from hi-resolution mono sources

Captain from Castile, based on the book by Samuel Shellabarger, was a huge production, budgeted at the then-astonishing figure of $4,000,000, filming in Technicolor on location in Mexico, with a starry cast led by dashing Tyrone Power. Alfred Newman’s score was and is one of his greatest achievements and received high praise from everyone. Newman’s orchestrator, Edward B. Powell said, “It was a picture that allowed him full range as a composer. It had everything: love, death, pomp, circumstance, action, scenery, and The Church.” Newman certainly delivered all of that and more. The score was nominated for an Oscar.

For this release, Captain from Castile (on two-CDs) was remastered using Ray Faiola’s initial mixes for the Screen Archives release, with some additional rebalancing and restoration applied to update the presentation.

Prince of Foxes was also adapted from a novel by Samuel Shellabarger, which became a best-seller in 1947. Set in the year 1500, Prince of Foxes was shot on location in Italy, with interiors done at Cinecitta Studios. The film starred Tyrone Power, Orson Welles, and Wanda Hendrix. What is really astounding is that Alfred Newman’s brilliant score did not receive a nomination - in fact, there were only three best dramatic or comedy score nominations that year. It’s certainly one of his greatest scores, in a career filled with nothing but great scores. Listening to those glorious themes, one simply has to marvel at the diversity of the score, the beauty of it.

Prince of Foxes was released previously on CD, but it was not complete and was missing some of its best music - that was all due to what was available and what could be done technically at the time. For this release, there is over twenty minutes of additional music, and in much better sound. It was completely restored, remixed, and remastered from new high-resolution transfers.

The Gunfighter was director Henry King’s second film with Gregory Peck (they would make a total of six films together). In addition to Peck, the western also featured Helen Westcott, Millard Mitchell, Jean Parker, and Karl Malden. Alfred Newman provided the score and given its three-minute duration, it’s more than a little surprising the number of film music fans who have begged for its release over the years. This is the score’s world premiere release and its brief duration packs a surprising punch. It was in “push/pull” format from 1/4” tape made in the 1980s from the original 35mm optical tracks.

LOVE IS A MANY-SPLENDORED THING

Love Is a Many-Splendored Thing, adapted from the 1952 novel A Many-Splendored Thing by Han Suyin (a pseudonym for Dr. Elisabeth Comber), was and is a hugely entertaining film, which starred Jennifer Jones and William Holden. Audiences really responded to the love story between a widowed Eurasian doctor (Jones) and an American correspondent (Holden). Of course, a major asset of the film was Alfred Newman’s stunning score and Sammy Fain and Paul Francis Webster’s great title song, which because a hit. Newman’s arrangement and weaving in and out of the Sammy Fain tune is perfection, his own themes co-mingling with the tune of the song in endlessly wonderful ways. It’s a textbook example of using a title song’s tune in the underscoring of a film, and both song and score won Oscars.

Kritzerland released Love Is a Many-Splendored Thing in improved sound back in 2012 and it sold out quickly - it’s been one of our most requested titles for reissue.

This 5-CD box set is also Kritzerland’s tribute to the late Nick Redman, who was responsible for restoring and getting released an amazing number of Fox scores that would have otherwise languished and been lost forever. The twenty-four-page full-color booklet contains liner notes and tributes from Julie Kirgo, Jon Burlingame, Mike Matessino, producer Bruce Kimmel, and David Newman.

HENRY KING AT FOX is limited to 1000 copies only -KRITZERLAND