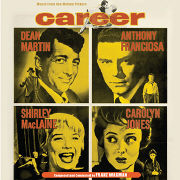 In 1959, Paramount brought Career (based on James Lee’s hit off-Broadway play) to the screen with a terrific cast including Dean Martin, Anthony Franciosa, Shirley MacLaine, Carolyn Jones, Joan Blackman, and Robert Middleton. The film was directed by Joseph Anthony, who was a successful theater director and an expert at turning plays into films - prior to Career he’d already done two for Paramount: The Rainmakerand The Matchmaker. The film was a success with audiences and critics, and received three Academy Award nominations - Best Art Direction (Hal Pereira, Walter H. Tyler, Samuel M. Comer, Arthur Krams), Best Cinematography (Joseph LaShelle), and Best Costume Design (Edith Head). But the film shines in every department, none more so than with its dynamic score by Franz Waxman.

From the exciting opening chords that lead directly into the big city theme, the score is absolutely thrilling. It is the kind of dramatic scoring that Waxman did so brilliantly. He gets inside the drama and the characters - the yearning, the hunger, the nastiness, the competiveness, the romance, the first taste of success, the bitter taste of failure after failure - it’s brilliant music from start to finish. By the time of Career, Waxman’s own career was filled with masterpiece after masterpiece - the 1950s alone brought forth Sunset Blvd., My Cousin Rachel, A Place in the Sun, Prince Valiant, Demetrius and the Gladiators, Rear Window, The Silver Chalice, Mister Roberts, The Spirit of St. Louis, Sayonara, Peyton Place, and The Nun’s Story - to name just a few. During his long and distinguished career, he was nominated for twelve Oscars and took home the prize twice, for Sunset Blvd. and A Place in the Sun. He had a unique musical voice and will forever hold a high place in the pantheon of great film composers.

Waxman’s score for Career is presented here complete and in stereo from the original session tapes housed in the Paramount vaults. We’ve included several bonus cues that appear in the film, including the source music song “(Love Is a) Career” by Sammy Cahn and James Van Heusen, and a little dance music cue composed by Gus Levene, as well as a couple of the cues from the mono music stem.

It’s always thrilling to be able to bring an unreleased Franz Waxman score to CD, especially one as dynamic and beautiful as Career.

Career is limited to 1000 copies only.

1. Main Title
2. Out of the Past/Cold Water Flat
3. The Surprise
4. Man and Wife*
5. Preparations/The First Quarrel
6. Sharon/Sharon Proposes
7. My Way of Life/Another Obstacle
8. The Smell of Success/Sad News
9. Two Up on Me
10. Detroit Theatre
11. Hysterical Proposal/Across the Threshold
12. Never So Good/No Divorce Parts 1 and 2
13. Defeated Again
14. Korea War
15. A New Start/Back From the Past
16. Discovering the Obvious/The Road to Success/Finale