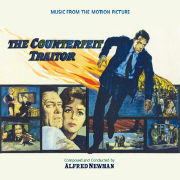 THE COUNTERFEIT TRAITOR
Music Composed and Conducted by Alfred Newman

In one of the greatest years for motion pictures and their scores, one of the most forgotten and best films of 1962 was Perlberg-Seaton’s production of the Paramount Picture The Counterfeit Traitor. The film was a sobering, gripping, exciting, touching espionage thriller and at the top of its class, as espionage thrillers go. Starring William Holden and Lilli Palmer, along with a host of wonderful overseas character actors (including Academy Award-winner Hugh Griffith), and some great location photography, The Counterfeit Traitor was written and directed by George Seaton (from the novel by Alexander Klein - based on a true story).

Recounting the story of Eric Erickson (Holden), an American-born citizen living in neutral Sweden during World War II, who is neutral enough to be profiting from working with both the Germans and the Allies. He is blackmailed into working for the Allies as a spy - this he reluctantly agrees to because the Allies (represented by the caustic Griffith) have him in a bind. The film is filled with powerful and memorable sequences and great performances, especially by Holden and Palmer. But the film simply got lost in that year’s incredible shuffle, as did many other great films - only later would some of them be rediscovered and achieve classic status - and The Counterfeit Traitor is indeed a classic. The Paramount production values were top-notch in every department, most especially in the costumes of Edith Head and the photography of Jean Bourgoin. And, of course, it didn’t hurt that The Counterfeit Traitor was blessed with a brilliant score by one of the greatest film composers who ever lived - Alfred Newman.

Newman, born in 1901, had spent most of his film music career at Twentieth-Century Fox, where he wrote many amazing scores, including such classics as The Mark of Zorro, The Keys of the Kingdom, The Song of Bernadette, Leave Her To Heaven, Captain from Castile, All About Eve, The Robe, A Man Called Peter, The Diary of Anne Frank and hundreds of others. He only wrote two scores in 1962, but they were both masterpieces and very different - How The West Was Won and The Counterfeit Traitor.

The score for The Counterfeit Traitor is classic Newman all the way, with its propulsive main title, his various suspense and dramatic cues, and one of his most memorable love themes ever - the theme for Marianna. That gorgeous theme weaves itself in and out of many cues in the score. It first presents itself as background music, then becomes more prominent in each successive cue in which it occurs. For those who’ve never seen the film, Newman’s score will be a revelation - one of the great scores of the 1960s and of Newman’s career. It is a treat to finally bring Newman’s great score to CD for the first time.

This CD was mastered from the original three-track Paramount master tapes housed in the Paramount vaults. While ninety-eight percent of the cues were in excellent condition, two short cues had very minor damage to them, but we felt that it was historically important to include them, even with that minor damage, which only amounts to less than 1:30 of the CDs playing time of just over sixty minutes.

This release is limited to 1500 copies only. - Kritzerland