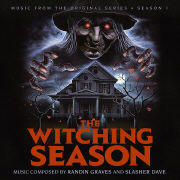 Howlin’ Wolf Records is proud to present the complete score for The Witching Season, an American horror anthology series created by Michael Ballif, written and directed by Ballif and James Morris, and produced by Morris, Allen Bradford, Jordan Swenson, and Parker Marcroft. The series consists of five interlocking segments that revolve around the Halloween season. Each episode, fueled by nostalgia, pays tribute to a different genre of horror. The score for The Witching Season is composed by Randin Graves and Slasher Dave.

Randin Graves is an award-winning film composer and Fulbright Fellow who utilizes diverse influences and skills while working from his professional home studio. Equally at home in classical and pop music worlds, he holds a B.A. cum laude in music composition from the well-regarded new music program at the University of California at San Diego. Graves has played in rock, electronica, folk, reggae, funk, jazz, and world fusion bands and is world-renowned for his mastery of the Australian didgeridoo. In addition, he plays guitar, keyboard, and Japanese koto. Randin Graves has sold albums and influenced players on every continent, including Antarctica.

Slasher Dave is a Detroit-based Horror Musician/Record Producer/Designer/Illustrator. He is the composer of numerous dark, ambient electronic recordings and soundtracks, including Spookhouse, Tomb of Terror, Exorcisms, The Horrors of Hellhouse, Cannibal Death Gods, and Night of the Jack-o-Lantern. Slasher Dave performs with numerous groups, including Acid Witch, Horrific, and Shivers. Matt Bacon of Dropout Media describes Slasher Dave’s work as “Eerie, powerful and wonderfully demented - this is the kind of sonic blasphemy that few can truly match.”

The Witching Season is a very limited pressing, beautifully packaged with a 20-page booklet featuring the gorgeous poster art by Marc Schoenback of Sadist Art Designs, with forewords by Creator/Writer/Director Michael Ballif and Writer/Director/Actor James Morris, and liner notes by Composers Randin Graves and Slasher Dave. The packaging is exquisitely created and designed with haunting imagery from the film, and all of the flavor of Halloween, by longtime Howlin’ Wolf Records Art Director Luis Miguel Rojas.