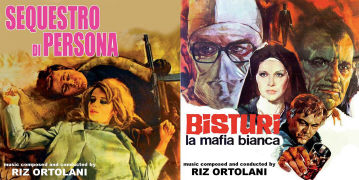 BISTURI LA MAFIA BIANCA (aka SECRETS OF A NURSE) is a dramatic 1973 movie directed by Luigi Zampa and starring Enrico Maria Salerno, Gabriele Ferzetti, Senta Berger, Enzo Garinei, Claudio Gora, Tina Lattanzi, Claudio Nicastro, Gino Pernice, Luciano Salce, Giorgio Sammartino, Antonella Steni. Professor Daniel Vallotti (Ferzetti), a famous surgeon, is the owner of a luxurious clinic, where patients are selected according to their income. To mask his greed and obtain fame as a benefactor, he visits once a week the poor in a hospital and he does it for free. Among the team of doctors in the clinic - who, weak or incapable, obey him like a king - there Dr. Giordani (Salerno), which, in addition to being professionally conscientious, is also honest. Upset by the last wrongdoing of Vallotti, who stopped a surgery and caused the patient to die, in order to cover up an investigation of the tax bureau, Giordani reported the surgeon to the public prosecutor. Playing all out, Vallotti, allied to the other doctors of the clinic, organized a conspiracy against Giordani, driving him under false pretenses to make a surgery fatal mistake. Faced with the choice of being prosecuted himself for murder or make a career under the wings of Vallotti, Giordani bows his head and withdraw his report. The design of the dishonest surgeon is upended by a serious illness that forced him to retire from the profession and in turn to trust the treacherous hands of his own colleagues.

SEQUESTRO DI PERSONA (aka ISLAND OF CRIME) is a dramatic 1967 movie directed by Gianfranco Mingozzi and starring Franco Nero, Charlotte Rampling, Frank Wolff,Enzo Robutti, Pierluigi Apra, Ennio Balbo, Ugo Cardea, Gino Cassani, Guy Heron, Fabrizio Jovine, Margarita Lozano, Giuseppe Merlo, Enrico Ostermann, Vito Rocca, Paolo Todisco, Max Turilli, Steffen Zacharias. The young Francis (Apra) is kidnapped by bandits in Sardinia. Her friend, Cristina (Rampling), a powerless witness to the kidnapping, rushes off to warn the family. Gavino (Black), a friend of the two, does not recommend to talk to the police, but she report the case and the police started the search for the kidnapped young man. In a firefight between gunmen and police, Francis is killed, but the bandits hide his body. Meanwhile the father of Francis offers to sell his lands to Osilo (Wolff), a wealthy landowner, to get the money needed to pay the ransom for his son. Later, Gavino let himself be seized by the bandits, and he convinced them that their leader is betraying them and exploiting them. The bandits deliver their leader to Gavino who surprisingly recognizes Osilo, who escapes but immediately reached by the parents of Francis and Gavino. For Osilo there is no way out: the two men together with Gavino make their own justice.