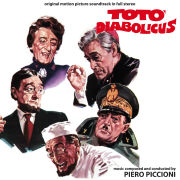 SOUNDTRACK
Piero Piccioni (December 6, 1921, Turin -July 23, 2004, Rome) was one of the greatest composers of film music. His name is associated with directors such as Francesco Rosi, Luchino Visconti, Alberto Sordi, and Vittorio De Sica. Only six songs were released from this OST in 1997 on the box set C.A.M. ''Toto, The Prince of Satirical Comedy'' (CVS 900-011), but for our CD we used every note recorded and preserved on the mono master tapes from the original recording session. For this score, the author composed a grotesque tango for the main theme alternating with suspenseful music and nightclub lounge themes.

PLOT:
Marquis Galeazzo Del Campo is found dead from a dagger bearing a scroll with the signature: Diabolicus. Del Campo’s four brothers are suspected as they are the heirs to his considerable fortune. Soon three of them are killed by Diabolicus, so the only survivor is Monsignor Antonino. Suspicion then falls on Pasquale, the illegitimate son of the four Del Campo brothers’ father. After a series of ups and downs, all the chickens come home to roost.

SOUNDTRACK:
Gianni Ferrio (November 15, 1924, Vicenza - 21 October 2013, Rome) was one of the top names in the world of television and the author of numerous soundtracks for cinema. He also partnered up with singers like Jula de Palma, Johnny Dorelli, Teddy Reno and particularly Mina.

From this OST, six songs were released in 1997 on the box set C.A.M. ''Toto, The Prince of Satirical Comedy'' (CVS 900-011), but for our CD we used every note recorded and preserved on the mono master tapes from the original recording session, except for a rare stereo mix (Tr.25). Ferrio composed a fantastic score with passionate pieces including Jazz and Blues to describe the noir scene, while the funny sides of Toto are emphasized with comical music. Suspenseful pieces play in the background in pure thriller style. There’s no shortage of lounge pieces either, including the brilliant ''Toto twist'' (Tr.23).

PLOT:
A police commissioner discovers his car was stolen, and, very annoyed, begins his work day. He has to deal with a man who believes his wife is cheating on him and who brings his parrot as a witness, then has to run away from a man who is being threatened by a blackmailer and must shell out a large sum of money. Later a priest brings him stolen silver but won’t reveal the name of the criminal who stole it. Finally, a so-called private detective calls him to come to a house where mysterious things are taking place, but the commissioner discovers that the guy is insane and has escaped from the mental institution and that at the suspicious house they are just filming a romantic comedy. At the end of his long day, the commissioner manages to expose a crooked customs officer leading a luxurious life, and kick out the man who thought his wife was cheating on him by throwing him out of the window. That night he dresses as a woman and arrests the blackmailer who is a relative of the blackmailed. He even manages to find his stolen car with a little help from the priest.

SOUNDTRACK:
Francesco De Masi (January 11, 1930 Rome- November 6, 2005, Rome) is the third musical giant star on this CD dedicated to Toto. He is a well-rounded composer who wrote a considerable amount of music for the screen, creating fabulous music for every kind of film including westerns, espionage films, and thriller and horror films (his background score for ''The New York Ripper'' was the crowning music-picture moment of Lucio Fulci’s filmmaking). Five songs were released from this OST in 1997 on the box set C.A.M. ''Toto, The Prince of Satirical Comedy'' (CVS 900-011). In reality Maestro De Masi composed very little original music for this film (perhaps including repertoire material). We used everything that was found on the original master tapes, including one previously unreleased track: the ''Finale'' (referred to as M 38 on the cuesheets) which did not appear in the previous box set from C.A.M.

PLOT:
Totocamen is a performer who’s manager, Tarantancamen, passes him off as the son of the god Amun. He performs at Thebes, in the presence of a Pharaoh dignitary and proves how strong he is by using tricks. Maciste, who is at the Pharaoh's court and is in love with Pharaoh Nefertiti’s daughter, puts his herculean strength to the service of the Assyrians to try to destroy Thebes. The Pharaoh entrusts Totocamen to guide the Theban army, but Totocamen tries to refuse the heavy task. Eventually he meets Maciste inside the temple. In the end the Pharaoh discovers the conspiracy and Maciste finds his love for Nefertiti. ---レーベルより