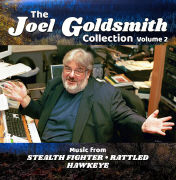 Released in 1999, STEALTH FIGHTER was directed by Jim Wynorski (credited as “Jay Andrews”), for whom Joel had previously scored the comedy LITTLE MISS MILLIONS (aka HOME FOR CHRISTMAS on video) and the sci-fi horror film VAMPIRELLA. The film follows a naval pilot who fakes his own death and steals an Air Force stealth fighter in order to become a mercenary, targeting military installations around the world. Goldsmith didn’t score STEALTH FIGHTER but composed its main theme at the director’s request (a task Joel repeated on Wynorski’s MILITIA and LOST IN THE WOODS). The movie was scored by Alex Wilkinson, a composer Joel had worked with and mentored in the past.

From 1996, RATTLED is a TV movie of the nature-on-the-rampage ilk, as hundreds of deadly rattlesnakes overrun a new housing project after dynamiting a nearby hillside awakens them from hibernation. Designer Paul Donahue (William Katt) is understandably concerned when his homestead is unexpectedly under siege by the confused, rattling serpents. Based on a novel by Joseph Gilmore, the film was directed by Tony Randel (HELLBOUND: HELLRAISER II, TICKS, FIST OF THE NORTH STAR). Joel’s score is richly melodic and possesses some very effective musical action and horror manifestations.

HAWKEYE was a single-season TV series, offering 22 episodes in syndication from 1994-95. The historical adventure drama is set in the Hudson Valley during the French and Indian War (1754-1763), and follows the continuing adventures of Hawkeye, the character created by James Fenimore Cooper in THE LAST OF THE MOHICANS and other novels. Lee Horsley is Natty Bumppo (aka Hawkeye), with Rodney A. Grant as his Native companion Chingachgook, and Lynda Carter as Elizabeth Shields, owner of the local English trading post. The series focused on Hawkeye, the indigenous woodsman he befriends, and the brave English woman trying to free her husband from the French. Goldsmith scored the series acoustically with an orchestra supplemented by flutes, harp, guitars, dulcimer, shakers, voices, whistles, and various percussion that resonated well with the series’ period and setting. Included here are some selections from Joel’s score for the pilot episode.

THE JOEL GOLDSMITH COLLECTION, VOLUME 2 is a limited edition release of 500 units.
4/4の週発売 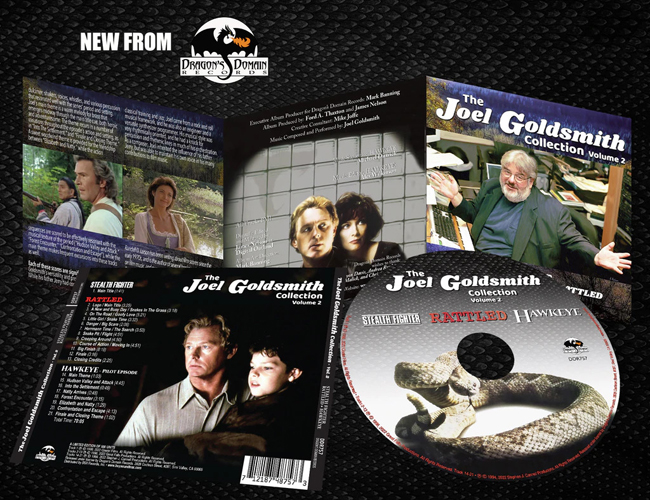