Airing on the NBC network in 1999, ATOMIC TRAIN begins when a disposal services worker sneaks a nuclear bomb onto a freight train in order to avoid the few thousand dollars it would cost for a legitimate, secure transportation delivery. Unfortunately, the freight train he chooses is having a bad day, becoming a runaway when its brakes fail which leads to its derailing outside downtown Denver. When the bomb is discovered and eventually explodes during the rescue process, most of Denver is left in ruins. In the middle of this disaster, NTSB investigator John Seger (Lowe) helicopters to the rushing train to try and fix its brakes while his family happens to be at home in the threatened blast area and are waiting for his return.

In 1999 composer Lee Holdridge (THE BEASTMASTER, SPLASH, THE MISTS OF AVALON, OLD GRINGO) was in the midst of a prolific run of scoring made-for-TV movies after beginning his scoring career in 1970 with a variety of feature films. ATOMIC TRAIN was the first of two disaster miniseries Holdridge would score for NBC (followed in 2004 by the Seattle earthquake movie 10.5). The score is built around two distinctive themes ? the first is a very effective percussively-driven suspense/danger motif with low brass filtering. The second is a warm theme for the family which heightens their bond and their struggle to reconnect when John is in danger on the train and later, when his family are threatened by the bomb.

Dragon’s Domain Records is excited to bring ATOMIC TRAIN to compact disc for the first time, mastered by James Nelson at Digital Outland under the composer’s supervision. The booklet includes exclusive liner notes written by author Randall Larson with the participation of the composer.

ATOMIC TRAIN is a limited edition release of 500 units. 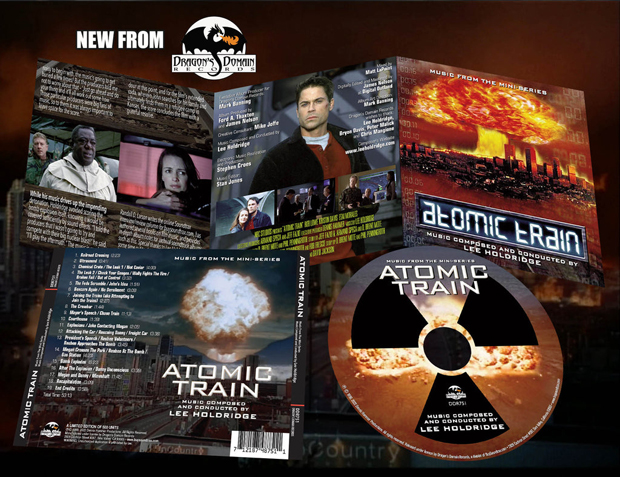