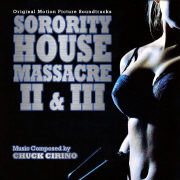 SORORITY HOUSE MASSACRE II began life one day when director Jim Wynorski noticed some sets were available at Roger Corman’s studios. After getting permission to film on the sets from Roger’s wife, Julie, while they were out of town and under the condition that Roger not find out, Wynorski wrote, cast and filmed under the title JIM WYNORSKI’S HOUSE OF BABES with no producer supervision. The Cormans were pleasantly surprised at how well the film had turned out and thought it would be easier to sell if it were a sequel to an existing film but neither of these sequels have anything to do with Carol Frank’s SORORITY HOUSE MASSACRE, released in 1986.

In SORORITY HOUSE MASSACRE II, five college girls buy the old Hokstedter place for their new sorority house. Once the site of a multiple murder five years earlier, the girls are able to get a good price on the house. The girls decide to spend the night in the house so they can greet the movers in the morning. Before you can consult your Ouija board or take a really long shower, the girls are being creeped on by neighbor from Hell Orville Ketchum, who also happens to ply his trade as a butcher.

Released in 1993, SORORITY HOUSE MASSACRE III, also known as HARD TO DIE, actually does not take place anywhere near a sorority house but finds at least five college girls who work in the high rise building of the Acme Lingerie Company working overtime one evening. A package mistakenly arrives at the office and one of the girls make the fatal mistake of opening the package, releasing an evil spirit that begins to pursue them. Peter Spellos returns as Orville Ketchum in his newfound role as building janitor.

SORORITY HOUSE MASSACRE II & III continues the longtime collaboration between filmmaker Jim Wynorski and composer Chuck Cirino, which includes films such as CHOPPING MALL, DEATHSTALKER II, NOT OF THIS EARTH, TRANSYLVANIA TWIST, RETURN OF SWAMP THING, A DOGGONE CHRISTMAS, A DOGGONE HOLLYWOOD and, most recently, A DOGGONE ADVENTURE.

Dragon’s Domain Records is excited to bring SORORITY HOUSE MASSACRE II & III to compact disc for the first time, mastered by James Nelson at Digital Outland with exclusive liner notes by author Randall Larson, with the participation of the composer and the director. 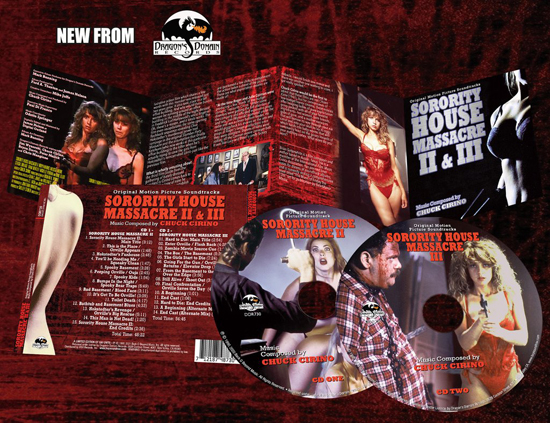