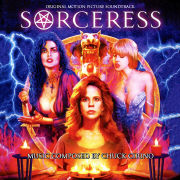 Julie Strain stars as Erica, a sexy witch married to attorney Larry (Poindexter), who is on the fast track to a partnership in a prestigious law firm. Erica makes a fatal mistake when she tries to kill Larry’s main competition for the partnership, Howard (Albert), instead crippling him for life. It so happens Howard’s wife Amelia (Blair) is also a witch, and she tries to destroy everyone and everything in Larry’s life. When Larry accidentally knocks Erica off their bedroom balcony and she falls to her death, her wiccan spirit and sexual energies remain at large to exact her own revenge.

Continuing their longtime collaboration, composer Chuck Cirino came aboard to score SORCERESS. Looking for a European sound for the score, Cirino used vocalist Alexa Anastasia again, after a successful collaboration on GHOULIES IV.

Dragon’s Domain Records is excited to bring SORCERESS to compact disc for the first time, mastered by James Nelson at Digital Outland with exclusive liner notes by author Randall Larson, with the participation of the composer and the director.

SORCERESS is a limited edition release of 500 units.>