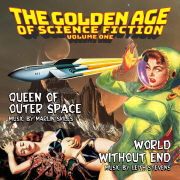 Dragon’s Domain Records presents THE GOLDEN AGE OF SCIENCE FICTION, VOLUME 1, featuring two scores from one of the most creative periods of science fiction cinema, the 1950s.

The Golden Age of Science Fiction cinema is generally understood to have occurred during the 1950s. The science that resulted in the creation and devastation of the atomic bomb, the paranoia that came with the rise of the Cold War and the advances in rocket science that heralded the possibility of space exploration had a profound effect on the popular entertainment of the decade. The monster movie that waged terror during the 1930s and ‘40s gave way to spectacles about alien invasion, enlarged mutated flora & fauna, and the dangerous discoveries beyond Earth’s horizons manifested new concepts in motion picture storytelling. But of course for every classic film, there were dozens of less stellar science fiction entertainment that found its way into cinema screens and drive-in theaters. Many of these were quickly and properly forgotten but low budget did not necessarily mean low quality, and some of these cheaply-made productions had a special charm about them.

For example, the two pictures addressed in this collection. Both are the work of director Edward Bernds, whose career began directing THREE STOOGES shorts, BLONDIE and BOWERY BOYS comedy features before switching to low-cost science fiction entertainment like SPACE MASTER X-7, RETURN OF THE FLY, and THE THREE STOOGES MEET HERCULES.

Released in 1956, WORLD WITHOUT END tells the story of a group of astronauts returning from a voyage to Mars, who are unexpectedly caught in a time warp and are propelled into a future, post-Apocalyptic Earth populated by mutates. Exploring the ruined, future Earth, the astronauts discover an underground civilization in which the women are strong and men have grown less virile. WORLD WITHOUT END has a competent main cast that includes Hugh Marlowe (THE DAY THE EARTH STOOD STILL, EARTH VS. THE FLYING SAUCERS, BIRDMAN OF ALCATRAZ), Nancy Gates (THE ATOMIC CITY, SOME CAME RUNNING), and a young Rod Taylor (THE TIME MACHINE, THE BIRDS, ZABRISKIE POINT).

The music for WORLD WITHOUT END was composed by acclaimed film composer Leith Stevens, known for scoring some of the decade’s most influential science fiction films, from George Pal’s DESTINATION MOON (1950), WHEN WORLDS COLLIDE (1951) THE WAR OF THE WORLDS (1953) to his unique jazz-inflected scores for THE WILD ONE, CRASHOUT, and PRIVATE HELL 36. During the ‘60s he composed episodes of Irwin Allen’s television series VOYAGE TO THE BOTTOM OF THE SEA, LOST IN SPACE, THE TIME TUNNEL, and LAND OF THE GIANTS.

Released in 1958, QUEEN OF OUTER SPACE was based on a ten-page treatment by Ben Hecht that took a satirical look at a planet run by women, which Charles Beaumont fleshed out into a screenplay. Allied Artists eventually brought the project into fruition, with former THREE STOOGES screenwriter Ellwood Ullman touching up Beaumont's screenplay into a full-on spoof of 1950s space opera, with American astronauts being drawn by a mysterious force to the planet Venus, which they find to be inhabited only by beautiful women and their tyrannical queen, who takes the astronauts prisoner. The film was noted for casting excessively glamorous Zsa Zsa Gabor as Venusian scientist Talleah.

The score for QUEEN OF OUTER SPACE was composed by Marlin Skiles, who began working in Holly-wood in 1933, where he orchestrated and scored many kinds of films. His earliest fantastic score was for Columbia’s A THOUSAND AND ONE NIGHTS in 1945. He joined Al-lied Artists in 1952 as a staff composer, providing music for the studio’s low-budget fantasy-comedies science fiction dramas such as THE MAZE (1953). After QUEEN OF OUTER SPACE, Skiles went on to score films for other studios, including SPOOK CHASERS (1957), THE HYPNOTIC EYE (1960), THE CRAWLING HAND (1963), JOURNEY TO THE CENTER OF TIME (1967) and numerous films outside the science fiction genre.

Dragon’s Domain Records presents THE GOLDEN AGE OF SCIENCE FICTION, VOLUME 1, featuring music from QUEEN OF OUTER SPACE and WORLD WITHOUT END for the first time on compact disc. The music has been mastered by James Nelson at Digital Outland and the liner notes have been written by noted author Randall Larson.

THE GOLDEN AGE OF SCIENCE FICTION, VOLUME 1 is a limited edition release of 500 units.