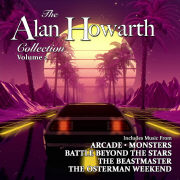 Dragon’s Domain Records, to be distributed through buysoundtrax.com, presents THE ALAN HOWARTH COLLECTION, VOLUME 2, featuring music composed and performed by Alan Howarth for several projects from his filmography presented here CD for the first time.

This collection of rare and previously unreleased tracks composed by Alan Howarth kicks off with the score for ARCADE, directed by Albert Pyun and written by David S. Goyer. Released in 1993, ARCADE tells the story of a psychologically compromised suburban teen named Alex (Megan Ward) who discovers her mother has committed suicide. One day after a particularly troubling day at school, Alex and her friends dart off to Dante’s Inferno, a local video game hangout, where a new virtual reality game called “Arcade” is being test-marketed by Difford (John de Lancie) a tech company snake-oil salesman who rewards the curious teens with home console versions of the game. Unknown to the kids, those who dare play the game and lose are imprisoned inside the console by a digital human-hybrid villain named Arcade (Johnathan Fuller). Over time the game infiltrates and manipulates their minds. Ultimately, it’s left up to Alex and Nick (Peter Billingsley) to convince the game’s lead programmer to help them free their friends and end Arcade’s deadly reign of technological terror.

In addition to Howarth’s score for ARCADE, THE ALAN HOWARTH COLLECTION, VOLUME 2 includes a block of odds and ends from other projects in his filmogragraphy.

For THE BEASTMASTER, Howarth composed a piece of music that was meant for the trailer but ultimately went unused. For BATTLE BEYOND THE STARS, at the request of composer James Horner, Howarth composed a piece of source music for the scene that introduces Gelt, played by Robert Vaughn. MONSTERS was a weekly horror anthology series that typically featured a different monster antagonist each week, ranging from animatronic puppets from a fictional children’s TV show to weapon-wielding mutated lab rats. Some of the episodes blended comic elements into the horror and were adapted from stories written by noted horror authors including Stephen King. One episode entitled “Far Below” from Season Three was produced by Debra Hill who had previously produced HALLOWEEN, THE FOG, HALLOWEEN II, and ESCAPE FROM NEW YORK for John Carpenter. Debra contracted Alan to compose this kind of music for the half-hour episode. Finally, THE OSTERMAN WEEKEND was released in 1983 and was the last film directed by Sam Peckinpah, the film was largely scored by Lalo Schifrin. Howarth was brought in at the last minute to write some additional suspense music for the film.

Alan Howarth, in addition to being a composer, is an accomplished sound designer and editor, having worked on films such as STAR TREK: THE MOTION PICTURE, POLTERGEIST, TOTAL RECALL, ARMY OF DARKNESS, BRAM STOKER’S DRACULA, STARGATE and many others. He has been a frequent music collaborator with John Carpenter on his films beginning with ESCAPE FROM NEW YORK in 1980 and including HALLOWEEN II & III, CHRISTINE, BIG TROUBLE IN LITTLE CHINA, THEY LIVE and PRINCE OF DARKNESS and Alan has scored many films on his own, including RETRIBUTION, HALLOWEEN 4 & 5, THE DENTIST, HEADLESS, BOO!, EVILUTION, BASEMENT JACK and most recently, HOUSE AT THE END OF THE DRIVE, BRUTAL and PROMISE.

THE ALAN HOWARTH COLLECTION, VOLUME 2 is a limited edition release of 500 units.