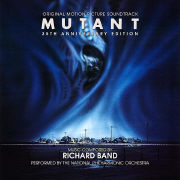 Released in 1984, MUTANT is a science fiction thriller from Laurelwood Productions and Film Ventures International, Edward L. Montoro’s short-lived production company credited with some dozen and a half low-budget drive-in movies during the 70s and 80s. Co-produced with Dick Clark, it was a medium-budget movie produced by a low-budget studio, whose production values and their 2.5 million budget may have stretched the production company’s resources to the breaking point. MUTANT was FVI’s last production and legend has it that after the film’s poor box office returns, producer Montoro disappeared, taking a million dollars from the production with him.

Originally called NIGHT SHADOWS, MUTANT is a variation on the NIGHT OF THE LIVING DEAD, only instead of an infestation of re-animated cadavers consuming the populace, local townsfolk are turned into ravenous killers after being infected by toxic waste dumped at a plant nearby. The heroes are a pair of vacationing brothers who are forced to get involved in fighting against the invasion.

The music for MUTANT was the work of Richard Band, one of science fiction and horror cinema’s most competent and versatile composers. Son of movie producer/director Albert Band, Richard’s first cinematic gig was for the 1978 movie LASERBLAST, composed in collaboration with Joel Goldsmith. Band went on to score THE DAY TIME ENDED for “Bud” Cardos, THE HOUSE ON SORORITY ROW for Mark Rosman, and just prior to MUTANT had completed scoring METALSTORM: THE DESTRUCTION OF JARED SYN for his older brother, director Charles Band. His music for MUTANT was performed by the National Philharmonic Orchestra as the film afforded him a reasonable music budget and a reasonable length of time to record, considerations a composer does not always have when composing films of this nature. At the time, the National Philharmonic Orchestra was one of four orchestras floating around in London that drew from the same pool of musicians and could be hired for a reasonable price at that time. Within a few years, it would become impossible to get the same deal for these orchestras. The end result is one of the composer’s best scores.

Richard Band was born in Los Angeles on December 28, 1953. He is the son of film producer-director-writer Albert Band (THE RED BADGE OF COURAGE ? screen adaptation), brother to producer-distributor Charles Band and uncle to young rock star Alex Band of the rock group ‘The Calling’. Shortly after his brother Charles had formed his first movie company, Richard decided to take a break from music and began to work as an assistant director on some of his films. He then went from assistant director to production manager, to associate producer and finally producer on over 13 films. Richard has since gone on to score over 75 feature films and many television productions including multiple episodes of STARGATE SG-1, WALKER: TEXAS RANGER and Disney's SING ME A STORY series.
Richard has composed the music for more than 10 interactive computer/video games over the years and has had many soundtracks that have been released of his film works. Richard has also scored many documentaries including the award-winning series’ MOST DECORATED, BRUTE FORCE and WEAPONS OF WAR and has also contributed much music to other series’ like THE REAL WEST, CIVIL WAR JOURNALS and BIOGRAPHIES. His experience over the years has brought him to record over 22 film scores with internationally renowned orchestras such as THE ROYAL PHILHARMONIC ORCHESTRA, THE LONDON SYMPHONY and THE ROME PHILHARMONIC. He has also had his music recorded in Prague, Romania, Croatia and Munich. In more recent years, Richard has also enjoyed scoring a variety of family and comedy films for Viacom and Paramount Pictures as well as hundreds of animated vignettes for the WB kid's network all of which were scored with orchestra. His musical talents can also be heard on several amusement park rides including ALIENS - THE RIDE as well as several Vegas venues. Among the many interactive games Richard has scored the music for STAR TREK, WATERWORLD, CASPER, STONEKEEP, DECENT UNDER MOUNTAIN, CLAYFIGHTER and INVICTUS: THE SHADOW OF OLYMPUS.

Dragon’s Domain Records is excited to bring the soundtrack to MUTANT in this 35th Anniversary Edition back to the marketplace with music newly mastered by James Nelson at Digital Outland, including liner notes written by author Randall Larson, with the participation of the composer and others related to the production.