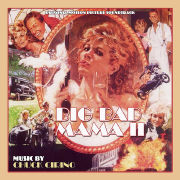 In 1974 Roger Corman released BIG BAD MAMA, a 1930s-era gangster action-sexploitation film, through his New World Pictures company. The movie was about Wilma McClatchie (Angie Dickinson) and her daughters, Billie Jean and Polly, who go on a crime spree, get caught up with a bank robber (Tom Skerritt), then dump him for a soothing grifter (William Shatner), but it all ends up in tragedy for Mama McClatchie. Thirteen years later, Jim Wynorski, a young director with three fantasy-horror movies under his belt?the latter two of which, CHOPPING MALL and DEATHSTALKER II, had been released by Corman’s Concorde Pictures?became interested in making a sequel to the 1974 movie. Thus was born BIG BAD MAMA II, released by Concorde in 1987. BIG BAD MAMA II gave a renewed life to the characters, revisited its time period, attitude, humor, and brief moments of tasteful if obligatory nudity, and has gone on to become something of a cult film over the last three decades.

The first BIG BAD MAMA had been scored by acclaimed mandolinist David Grisman, first of a handful of movie scores he composed and the result was a score steeped in bluegrass and folk music of its era. For his sequel, Wynorski wanted something different, and brought in his friend, the composer he’d worked with and trusted from CHOPPING MALL and DEATHSTAKER II, Chuck Cirino. He would go on to write the music for the majority of Wynorski subsequent films. Wynorski had one simple request when he bought Cirino into BIG BAD MAMA II: “‘Give me Morricone!’” Wynorski and Cirino had met in New York via their mutual love for film composer Ennio Morricone, which remains a touchstone between them when collaborating on films. The BIG BAD MAMA II score was recorded at Shadoe Stevens’ electronic music studio, which Cirino had rented along with its gear to create his scores for CHOPPING MALL, DEATHSQUAD II, and BIG BAD MAMA II. The synthesizers and other equipment was state-of-the art for its day, but quite embryonic by today’s standards.

Dragon’s Domain Records is excited to bring BIG BAD MAMA II to compact disc for the first time, mastered by James Nelson at Digital Outland with exclusive liner notes by author Randall Larson, with the participation of the composer and the director.
BIG BAD MAMA II is a limited edition release of 500 units.