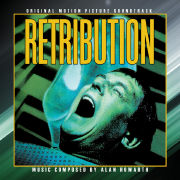 RETRIBUTION tells the story of troubled, shy painter George Miller (Lipscomb), who tries to commit suicide by throwing himself off of a roof at the exact same moment when small time gangster Vito Minelli is gunned down by his partners and set on fire across town. As George is brought back to life by paramedics, he finds as his soul returns to his body that he is now sharing it with the angry soul of Vito Minelli. Gaining control of George’s body when he sleeps, Vito uses this new shell to gain revenge on his killers using newly acquired telepathic abilities. As George begins to piece together what is happening to him, he seeks help from his psychiatrist (Wing), his neighbor, Angel (Snyder), a kooky hooker with a heart of gold, while tough police detective Ashley (Axton) is homing in on him as a suspect in the grisly murders.

RETRIBUTION (known on video as RETRIBUTION, THE ULTIMATE NIGHTMARE) was the feature film debut of Egyptian-born director Guy Magar, who up until 1986 had worked mostly in television. The film is a supernatural thriller inspired by THE EXORCIST, which is one of Magar’s favorite movies. For the film’s music, Magar brought in composer/synthesis Alan Howarth, who at the time had progressed from doing special sound effects for STAR TREK: THE MOTION PICTURE to partnering with director/composer John Carpenter to fully realize his ambitions for the scores of ESCAPE FROM NEW YORK, HALLOWEEN II and III, and CHRISTINE. Howarth had begun branching out as a solo composer in 1983. RETRIBUTION would be his third solo film score, composed from May to October 1986, between working with Carpenter on BIG TROUBLE IN LITTLE CHINA and PRINCE OF DARKNESS.

Alan Howarth, in addition to being a composer, is an accomplished sound designer and editor, having worked on films such as STAR TREK: THE MOTION PICTURE, POLTERGEIST, TOTAL RECALL, ARMY OF DARKNESS, BRAM STOKER’S DRACULA, STARGATE and many others. He has been a frequent music collaborator with John Carpenter on his films beginning with ESCAPE FROM NEW YORK in 1980 and including HALLOWEEN II & III, CHRISTINE, BIG TROUBLE IN LITTLE CHINA, THEY LIVE and PRINCE OF DARKNESS and Alan has scored many films on his own, including THE LOST EMPIRE, RETRIBUTION, HALLOWEEN 4 & 5, THE DENTIST, HEADLESS, BOO!, EVILUTION, BASEMENT JACK, BRUTAL, HOUSE AT THE END OF THE DRIVE, ZOMBIE NIGHT and PROMISE.

Previously released on compact disc by Silva Screen Records in the early 1990s, Dragon’s Domain Records is excited to bring RETRIBUTION back from beyond the grave, with previously unreleased music and newly remastered by James Nelson at Digital Outland. The booklet includes exclusive liner notes written by author Randall Larson, with the participation of composer Alan Howarth.

RETRIBUTION is a limited edition release of 1000 units.