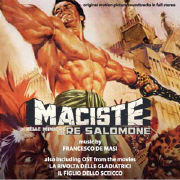 Digitmovies releases for the first time on CD as volume XVII of the series dedicated to the Italian Peplum soundtracks the OSTs by Francesco De Masi from the following movies: “Maciste nelle miniere di Re Salomone” (aka “Samson in King Solomon's Mines”) directed in 1964 by Piero Regnoli and starring Reg Park, one of the most famous faces of of the Italian Peplum as the mighty Maciste, and in supporting roles Wandisa Guida, Eleonora Bianchi,Nino Persello,Bruno Scipioni,Carlo Tamberlani,Bruno Piergentili,Loris Loddi. The story is placed in Africa: King Namar has built a temple in the place where once the fabulous King Solomon's mines did exist. Some nobles of the kingdom, thirsty for power and money, succeed in overthrowing the sovereign with a coup d'etat and in converting the temple back into mines. They force all the population to work into the mines as slaves. Maciste (Park) is informed about the situation and he decides to solve it by overthrowing the tyrants and restoring the former sovereign on the throne.“La rivolta delle gladiatrici” (aka “The Arena”) directed in 1974 by Steve Carver and it seems also by Joe D'Amato (uncredited), produced by Roger Corman and Mark Damon, edited by John Carver and Joe Dante who ten years later would direct that cult movie called GREMLINS and with a cast of famous faces like Margareth Markov, Lucretia Love, Pam Grier (the queen ofthe black exploitation),Rosalba Neri, Maria Pia Conte, Mimmo Palmara,Pietro Torrisi. In the land of Gallia the high priestess Bodicia is captured with other girls by Roman soldiers. At the same time a black dancer called Mamawi is captured. The girls are led to Italy and sold as slaves to sexually satisfy the gladiators. Mamawi unleashes a brawl in the kitchen and the shady Timarcus decides to let the girls fight in the arena, with the purpose to reawaken the interest of the population in the fights. The surviving girls are persuaded by Mamawi and Bodicia to escape. Among the female gladiators a revolt explodes which will lead them to freedom. “Il figlio dello sceicco” (aka “Kerim, Son of the Sheik” ) directed in 1962 by Mario Costa and starring Gordon Scott,Cristina Gaioni, Moira Orfei,Alberto Farnese,Jany Clair,Maria Grazia Spina,Gordon Mitchell. In Egypt of the 19th century B.C. the tyrant Omar (Farnese) uses an iron fist against the inhabitants of the province whose governor he is. Kerim (Scott), the son of the sheikh, is fighting to defend the stakes of the weakest ones. The unforgettable composer and conductor Francesco De Masi has written three orchestral scores which appear on CD for the very first time and we must thank our dear friends at Beat Records that this project could finally see the light of day. Sadly the complete session mastertapes did not survive until today and so for this record we had to use the mastertapes assembled for the original long-playing records produced by Beat Record as collector's limited edition in the mid-80s (Maciste nelle miniere di Re Salomone and La rivolta delle gladiatrici on LP CR 12 and Il figlio dello sceicco on LP CR 14).The biggest discovery was really made during the production of this CD (71:06) : The mastertapes with the LP mock-ups issued during the '80s were in mono, but full stereo copies of the mastertapes were discovered and saw the light of day for the first time now since the recording session times! From the OST of “Maciste nelle miniere di Re Salomone” five tracks have been selected: De Masi has written mysterious and dramatic music (Tr.1,Tr.2) and themes that evoke the superhuman power of the hero Maciste (Tr.3,Tr.5). From the OST of “La rivolta delle gladiatrici” seven selections appear here which alternate heroic music (Tr.6) with battle themes(Tr.7,Tr.9,Tr.10) and music with a sacred flavour and choir (Tr.8). From the OST of “Il figlio dello sceicco” fifteen tracks have been selected which take the listener into an exotic dimension introduced in Tr.13. De Masi has created several tracks for battle scenes (Tr.14,Tr.15,Tr.16) and mysterious ones (Tr.19) as well as delicate love themes (Tr.22,Tr.23). It was right and proper to rescue and preserve these 3 OST of the Italian Silver Age as a sincere tribute to the musical art of Francesco De Masi.
＊レーベルより抜粋