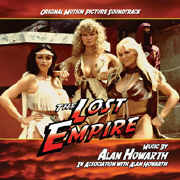 THE LOST EMPIRE tells the story of Angel Wolfe (Vincz) a police officer seeking to avenge the death of a brother officer at the hands of a gang of jewelry store-robbing ninjas. That’s right. Ninjas who rob jewelry stores. At night. When Angel learns the ninjas are working for unapologetically evil Dr. Sin Do, who is in league with the mysterious evildoer known only as Lee Chuck (Scrimm, in a dual role), Angel recruits some of her athletic lady friends, Whiplash (Aames) and the legendary Indian spirit goddess Whitestar (De La Croix) and they all take off for Dr. Sin Do’s hidden island fortress for some good old fashioned payback. As it happens, Dr. Sin Do, a would-be heir to the mantle of Fu Manchu, is headquartered on a fortified island, not quite unlike Dr. NO, where captive women are imprisoned and forced to fight as gladiators in sadistic tournaments to please the members of his Satanic syndicate.

Released in 1983, THE LOST EMPIRE was the feature film debut of exploitation director Jim Wynorski. A mixture of camp fantasy, corrupt villains, and chesty babes - not to mention caped ninjas and killer apes - the film is a wild and surreal action fantasy that makes the most of its resources despite the lack of a workable budget and loaded with plenty of charm and beautiful women. Wynorski had grown up in New York with aspirations of becoming a movie director, but his announced desire to “be Roger Corman” got him kicked out of a college film program for “lack of aptitude”. So Wynorski moved to California in 1980 and got a job making coming attractions trailers for… Roger Corman. While working for Corman, he wrote and co-produced three exploitation movies for Corman’s New World Pictures in the early 1980s, leading up to THE LOST EMPIRE, which was produced outside of Corman’s company. With a story torn from the headlines of decades’ old pulp magazines and enlivened with a bevy of buxom beauties, THE LOST EMPIRE’s storyline is largely a place setting for Wynorski’s predilection for gorgeous gals, and the director spared no opportunity to exhibit their abundant assets in the telling of his tale.

When it came to scoring THE LOST EMPIRE, Wynorski selected composer Alan Howarth, who at the time was John Carpenter’s musical associate, having worked with the director/composer to develop the scores for ESCAPE FROM NEW YORK, HALLOWEEN II and III, and CHRISTINE. Howarth had just branched out to do solo work (adding some additional cues to Sam Peckinpah’s THE OSTERMAN WEEKEND after the film’s main composer, Lalo Schifrin, had completed his score); LOST EMPIRE would be Howarth’s first feature film score on his own. THE LOST EMPIRE gave Howarth the chance to do something the minimalistic vibe of the Carpenter scores up until then hadn’t, and that was to compose exciting adventurous melodies and heroic themes. Howarth played straight man to the film’s humor, embracing Wynorski’s blend of fun fantasy, fierce fights, and frolicsome female flesh with music that supported the action and adventure of the storyline.

Previously released on compact disc by Silva Screen Records in 1990 and long out of print, BSX Records brings THE LOST EMPIRE to compact disc again, presented on 2 CDs. The music has been newly remastered and includes previously unreleased music. Disc 1 contains the music as it was presented in the film. For the final film mix, the music was mixed into mono but is presented here in stereo. Disc 2 contains the original album program that was assembled by the composer for the original compact disc release, where he combined shorter tracks and remixed many of them to exhibit additional stereo dimensionality for a better listening experience. The booklet contains new liner notes written by author Randall Larson, including new insights by composer Alan Howarth on the creation of the score.

THE LOST EMPIRE is also part of the 2013 B-MOVIE ROAD TOUR and will be returning to theaters this Summer and Fall 2013. Check out www.bmovieroadtour.com for more details.