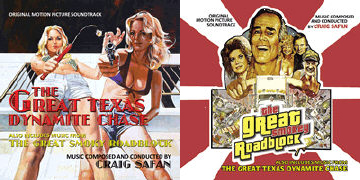 THE GREAT SMOKEY ROADBLOCK, also known as THE GOODBYE RUN, was written and directed by John Leone (TOUGH ENOUGH) and starred Henry Fonda, Eileen Brennan, Robert Englund, Susan Sarandon, Melanie Mayron, Dub Taylor, Austin Pendelton and John Byner. Released in 1977, THE GREAT SMOKEY ROADBLOCK tells the story of Elegant John (Fonda), a lifelong truck driver whose big rig has been repossessed while he has been hospitalized for cancer treatment. John breaks out of the hospital and decides to steal his 18 wheeler back in order to make one last cross-country run before he dies. Along the way, he meets Beebo (Englund), a down-on-his-luck Bible thumper, and hooks up with an old flame, brothel owner Penelope (Brennan) and her bevy of recently evicted happy hookers and takes them along for the ride. To score the film, composer Craig Safan wrote a score that mixes blue grass, country blues and Coplandesque Americana that paves the way for Elegant John’s final run for freedom. One of the highlights of the score is the main title, modeled after Aaron Copland’s Appalachian Spring. The composer recorded the piece with a string quartet, three woodwinds, horn, trumpet, percussion, bass and piano (which he played himself). THE GREAT SMOKEY ROADBLOCK also contains one of Safan’s favorite compositions, a theme for Beebo, who is characterized by a jaunty sidestepping melody on dobro. For Fonda’s character and the dramatic action in the film, the composer takes a more classical approach.

THE GREAT TEXAS DYNAMITE CHASE, also known as DYNAMITE WOMEN, was directed by Michael Pressman (DOCTOR DETROIT, BOULEVARD NIGHTS) , written by Mark Rosin and Peter MacGregor-Scott, and starred Claudia Jennings(‘GATOR BAIT, DEATHSPORT, FAST COMPANY) and Jocelyn Jones (TOURIST TRAP, THE ENFORCER). Released in 1976, THE GREAT TEXAS DYNAMITE CHASE tells the story of Candy Morgan (Jennings) and Ellie-Jo Turner (Jones), two small town girls at the end of their respective ropes who join together and try to take some control over their lives. Recently escaped from prison, thanks to a handy stick of dynamite, Candy first bumps into Ellie-Jo when Candy appears at her bank and robs the place, threatening to light the fuse on her dynamite if the bank manager doesn’t comply. Candy needs to get money to save her family farm as the bank is getting ready to foreclose on the property. After Candy gets away with the money, Ellie-Jo is fired for not trying hard enough to stop Candy’s departure. Later, as Ellie-Jo has left her small town and is hitchhiking on the highway, she gets picked up by Candy and they begin their friendship. Impressed by Candy’s boldness and ingenuity with the dynamite, Ellie-Jo suggests they partner up and they start robbing banks all across Texas, earning themselves the nickname ‘the Dynamite Women’. If the story sounds familiar today, it was later recycled with a much larger budget (and a far more fatalistic ending) in 1991’s THELMA AND LOUISE. To score the film, composer Craig Safan combined elements of rock, country, blues and Americana to create a unique hybrid score. In addition, THE GREAT TEXAS DYNAMITE CHASE gave Safan an opportunity to showcase his talents as a songwriter and he provided two songs for the film.

Craig Safan has composed music for numerous feature films, television shows, theatrical musicals, and circuses. He is the winner of eight ASCAP Top Show Awards as well as an Emmy nominee. Craig is also a recipient of a Watson Foundation Fellowship and is a member of the Executive Music Committee at the Academy of Motion Picture Arts and Sciences. Currently Craig divides his time between Los Angeles and New York City where he is developing several new musicals.