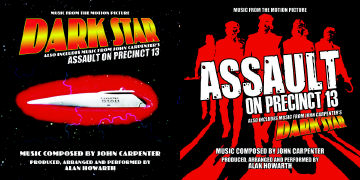 Released in 1976, ASSAULT ON PRECINCT 13 is John Carpenter’s second feature film and stars Austin Stoker, Darwin Joston, Laurie Zimmer, Tony Burton, Martin West, Charles Cyphers, Nancy Loomis, Kim Richards and Frank Doubleday. ASSAULT ON PRECINCT 13 takes place in Los Angeles and begins with a surprise massacre of several gang members of different ethnicities carried out by members of the Los Angeles Police Department. In retaliation, the rival gangs make a blood vow and unite to form one giant army, declaring war on the LAPD. Their first target is local Precinct 13, scheduled to be shut down and operating with a minimal staff. On the day of the siege, a bus transporting three prisoners arrives, including notorious criminal Napoleon Wilson (Jostin). As the siege begins, the few remaining staff members and patrol officer Ethan Bishop (Stoker) must set aside their differences and work together to survive long enough for help to arrive. On its initial release in Los Angeles in 1976, ASSAULT ON PRECINCT 13 received mixed reviews and poor returns at the box office. It wasn’t until the film played at Cannes and the 1977 London Film Festival that it gained favorable notices and earn more success, including its stature as a cult film.

Released in 1974, DARK STAR was John Carpenter’s first feature length film. DARK STAR began life as a student film at USC, filmed over three years as funding became available. Written by Carpenter and Dan O’Bannon (who would later write ALIEN) and starring a small cast of non-actors, including O’Bannon himself as the film’s earnest protagonist, Sgt. Pinback. Post 2001 and THX 1138, DARK STAR offered on the surface a more darkly humorous presentation of the future, telling the story of the final days of the crew of the DARK STAR, well into their 20 year mission of travelling to newly discovered star systems and destroying unstable planets that may present a danger to future attempts at colonization. As their mission nears completion, they find themselves facing unexpected danger in the form of a runaway alien lifeform that resembles a beach ball, a sentient bomb that has been activated prematurely and their own ship, which is in desperate need of repair.

A common denominator for both DARK STAR and ASSAULT ON PRECINCT 13 is John Carpenter, who directed, helped to write the scripts and composed the music for both films. These early scores contain a number of musical devices, techniques and ideas that would begin to define the Carpenter sound familiar to fans of his subsequent films like HALLOWEEN and ESCAPE FROM NEW YORK. The new performances on this recording have been recreated from Carpenter’s original tracks by pioneering electronic musician Alan Howarth. Subsequently a composer of many films on his own, Howarth, began working with Carpenter in 1981 on ESCAPE FROM NEW YORK, a relationship that continued through THEY LIVE in 1988 and thus Howarth came to understand Carpenter’s style and technique intimately. When asked to reinterpret the music from DARK STAR and ASSAULT ON PRECINCT 13, as he had with BUYSOUNDTRAX Records’ previous recording of music from THE THING, Howarth brought with him that experience and understanding. As both scores were recorded originally in mono, this project also represented an opportunity to present the music in a new stereo recording.

Both ASSAULT ON PRECINCT 13 and DARK STAR have been released on compact disc in the past but are difficult to find, especially DARK STAR, which was briefly presented as a lengthy suite of music, dialogue and sound effects from the film. BUYSOUNDTRAX Records is proud to present new recordings of both scores, in stereo for the first time, along with a new recording of the song “Benson, Arizona” from DARK STAR, produced and arranged by composer Dominik Hauser.

ASSAULT ON PRECINCT 13/DARK STAR is a limited edition release of 1500 units.