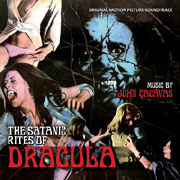 Evil begets evil on the sabbath of the undead!

After attempting to modernize their popular Dracula franchise with DRACULA, A.D. 1972, Hammer produced a follow-up film, THE SATANIC RITES OF DRACULA, which again finds the Count revived in a modern day setting. Taking place two years after the events of DRACULA, A.D. 1972, the film opens with the dramatic escape of an undercover agent from the Pellham House Of Psychic Examination. After witnessing a satanic ritual there, the agent returns to MI5 and dies on the operating table from the strain of relating his horrifying tale of a girl sacrificed on an altar in the presence of some of the biggest names in government secrets. Assuming that black magic may be involved, Inspector Murray (Coles) suggests to his superior, Torrence (Franklyn) that they consult with occult expert Lorrimer Van Helsing (Cushing), who is the modern day descendant of the great vampire hunter. Van Helsing discovers that he knows one of the men who attended the ritual, Professor Keeley (Jones), and pays him a visit, learning that Keeley has been working on a lethal strain of plague virus for a mysterious benefactor. Before Van Helsing can learn more about Keeley’s employer, someone breaks in and takes a shot at him. When he awakens, he finds Keeley hanging from a rope. Meanwhile, Inspector Murray, Torrence and Van Helsing’s granddaughter, Jessica (Lumley) go to Pellham House. While they are searching the grounds, they discover a cache of female vampires in the basement. Barely escaping from the basement with their lives, they return to Van Helsing’s office to compare notes. Van Helsing begins to suspect that Keeley’s employer, a man who has never been seen and who is headquartered in a building recently constructed on the very spot Van Helsing killed Dracula two years before can only mean his most hated foe has somehow returned. As he begins to fashion a silver bullet, Van Helsing begins to ponder the implications of some of the most important men in British government in thrall to Dracula and in possession of Keeley’s killer plague virus…

When it came time to score THE SATANIC RITES OF DRACULA, Hammer producers turned to composer John Cacavas, who had impressed them with his recent score to HORROR EXPRESS, starring their friends Christopher Lee and Peter Cushing. Cacavas would provide the film with music that was similarly contemporary but also more mature. In his approach to scoring the film, Cacavas uses modern jazz/pop sensibilities to score the villains of the piece, saving the traditional orchestral writing for Van Helsing and his associates. Dracula and his servants are represented in the score by modern electronic musical elements.

John Cacavas began his musical career at age 13, forming his own band in Aberdeen, South Dakota. He went to college at Northern State University and then went on to study music and composition at Northwestern University in Evanston, Illinios, where he became active as an arranger for several varsity musicals and director of a weekly radio orchestra broadcast. Upon graduation, he entered the Armed Forces and became an arranger with the prestigious United States Army Band in Washington, D. C. It was there that he began writing arrangements and compositions for the nation's major music publishers.

Upon his discharge, Cacavas moved to New York and began pursuing his career in earnest, continuing his composing and arranging. He served as assistant conductor at CBS under the tutelage of the esteemed Alfredo Antonini, and worked closely with Morton Gould. Cacavas went on to become Director of Publications at Chappell & Co. Inc. while continuing with his composing career. In 1970, he and his family moved to London where he became established as a film composer. Three years later he relocated his family to Beverly Hills where he became a full-time composer for feature films and television.

Cacavas has written extensively for television. Along with his five years of scoring KOJAK, and three years of HAWAII FIVE-0, he has written for such diverse shows as MATLOCK, COLUMBO, QUINCY, MURDER SHE WROTE, THE EQUALIZER and BIONIC WOMAN, among others. His music has also appeared on FRIENDS, EVERYBODY LOVES RAYMOND, MALCOLM IN THE MIDDLE, MAGNUM P. I., DAWSON’S CREEK, BUFFY THE VAMPIRE SLAYER, X-FILES and countless others. A sample of his scores for TV movies are TIME MACHINE, MURDER BY REASON OF INSANITY, POLICE STORY II, DIRTY DOZEN II and III and THE RETURN OF IRONSIDE. His scores for mini-series include THE EXECUTIONER’S SONG, JENNY’S WAR, CONFESSIONAL, A DEATH IN CALIFORNIA and PERFECT MURDER, PERFECT TOWN. Feature motion picture credits include AIRPORT '75 and AIRPORT '77, PLAYING WITH FIRE, HANGAR 18, REDNECK, PANCHO VILLA and source music for KING OF COMEDY.