MUSIC OF BATTLESTAR GALACTICA FOR SOLO PIANO, The (2CD) 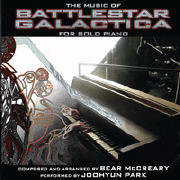 BuySoundtrax Records is proud to announce the release of The Music of Battlestar Galactica For Solo Piano a two-disc set featuring piano performances by Joohyun Park of Bear McCreary’s groundbreaking score. All of the arrangements were done by McCreary and were featured in the Battlestar Galactica Songbook, released by Hal Leonard in 2011. The album features appearances by soprano Melanie Henley Heyn and McCreary himself, who performs “Kara Remembers” which was conceived as a track to be played by four hands, with Park. The package features liner notes by Randall Larson and unique artwork by frequent Battlestar Galactica vocalist Raya Yarbrough.

Pianist Joohyun Park was born in Kwang-Ju, South Korea. She began studying music at age 6. Park received both a Bachelor’s and Master’s Degrees of Piano from Yon Sei Univeristy (Seoul, Korea) and a Bachelor’s Degree of Contemporary Writing and Production from Boston’s famed Berklee College of Music. She has worked as a score coordinator, pianist, orchestrator and assistant composer for movies including Priest, The Informers, Drag Me To Hell, Creation, When in Rome, The Black Tulip, and Love Happens.

Variety called composer Bear McCreary’s score for Battlestar Galactica - the award-winning series on the SyFy channel from 2004-2009 - “the most innovative music on TV today,” and NPR said it “fits the action so perfectly, it’s almost devastating: (it’s) a sci-fi score like no other.”

The music from Battlestar Galactica has a rabid following. No fewer than six soundtrack albums have been released to date, all selling well and enthusiastically praised by critics. There have also been several live concerts featuring the music. In 2008, more than 1,000 fans attended two sold-out shows at The Roxy Theatre in Los Angeles, with some fans flying in from as far as England and Australia. The following year, the Battlestar Galactica Orchestra performed three sold-out shows at the House of Blues in San Diego during Comic Con. In 2010, McCreary conducted the world premiere performance of the Battlestar Galactica Symphony, as part of the renowned Fimucite Film Music Festival in Tenerife, Spain. In 2011 McCreary again treated Spanish fans to the music as part of the Festival Internacional de Musica de Cine in Ubeda. A ballet based on McCreary’s scores for the series premiered in 2009, performed by the dancers of the Theaterhagen in Hagen, Germany.

McCreary, himself a skilled pianist, personally translated his acclaimed, world music-influenced orchestral score into unique piano solo arrangements. “At last, fans can now be a part of the musical process themselves and experience the score as I first did: with fingertips touching the ivories,” described McCreary.

“When I was recording,” said Park, “I was focusing on expressing the feeling of the original tracks from the point of view of a classical pianist. Powerful but not overwhelming, calm but not boring, executing those beautiful grooves with accuracy and making the aggressive passages sound truly massive.”

McCreary performed these pieces and recorded many as videos uploaded to his YouTube library. “As I learned the pieces, I realized that another artist would be able to bring a new interpretation to these works,” he explained. “My performances, though technically correct, are strongly influenced by the studio recordings I spent years producing. I was thrilled to collaborate with Joohyun Park because she breathed new life into these compositions. Under her expert fingers, these pieces thrive as works for solo piano, not just pared down versions of larger orchestrations. Listening to her feel the music and re-interpret it was a real thrill during the making of this album.”