MURDERERS AMONG US: THE SIMON WIESENTHAL STORY 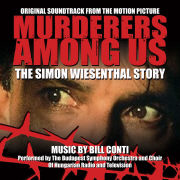 BSX Records presents MURDERERS AMONG US. The album features music composed by Bill Conti (ROCKY, NORTH & SOUTH, THE RIGHT STUFF) for the 1989 biographical drama about the famous Nazi hunter, Simon Wiesenthal, directed by Brian Gibson (THE JOSEPHINE BAKER STORY, WHAT’S LOVE GOT TO DO WITH IT, POLTERGEIST II: THE OTHER SIDE), written by Abby Man, Robin Vote and Ron Hutchinson, based on Simon Wiesenthal’s memoirs, starring Ben Kingsley (GANDHI, SNEAKERS, SEXY BEAST) as Simon Wiesenthal, along with Renee Soutendijk, Louisa High, Craig T. Nelson and Paul Freeman.

Made for HBO and broadcast in April, 1989, MURDERERS AMONG US is a biographical portrayal of the life of Simon Wiesenthal, the famous Nazi Hunter. After being liberated from Malthausen, an Austrian concentration camp in 1945, the film follows Wiesenthal as he agrees to work with the American War Crimes Unit to document the horrifying deeds of the Third Reich and to help apprehend the guilty men involved. As he begins his work, he slowly pieces his own life together. Wiesenthal is reunited with his wife, whom he had believed was dead. In Vienna, he opens a documentation center but his increasing devotion to hunting down the architects of the Holocaust begins to take a toll on his personal life. The film also follows his rise to become one of the leading Nazi hunters in the world, eventually bringing such war criminals to justice as Adolf Eichmann and Klaus Barbee.

Born in Providence, Rhode Island on April 13, 1942, Oscar and three-time Emmy Award-winner Bill Conti is one of Hollywood's most sought-after composers and conductors for both film and television. His compositions have sold in excess of eight million albums and he is in great demand as a conductor of symphony orchestras throughout the Unites States. In 1995, the American Society of Composers, Authors and Publishers (ASCAP) awarded Conti the Golden Soundtrack Award for lifetime achievement in film and television. For the silver screen, Bill Conti has composed the musical scores for films such as ROCKY, F.I.S.T, VICTORY, PRIVATE BENJAMIN, THE RIGHT STUFF, FOR YOUR EYES ONLY, BROADCAST NEWS, THE KARATE KID, THE THOMAS CROWN AFFAIR and many others. Conti's work for the small screen has been equally as critically acclaimed, receiving a total of ten Emmy nominations throughout his career, working on projects such as NORTH & SOUTH, DYNASTY, THE COLBYS, CAGNEY & LACEY and FALCON CREST. His relationship with the Academy of Motion Picture Arts & Sciences spans two decades as he has been the musical director for more than twelve of the internationally-televised annual Academy Award ceremonies.

The music for MURDERERS AMONG US is composed by Bill Conti, performed by the Hungarian State Opera Orchestra and Chorus, conducted by the great Harry Rabinowitz. Previously released on compact disc by Bay Cities Records in the early 1990s and presented in the form of two lengthy suites, BSX Records now presents MURDERERS AMONG US in its entirety, including 25 minutes of previously unreleased music, newly remastered by Digital Outland.

MURDERERS AMONG US is a limited edition release of 1000 units and includes new liner notes written by Randall Larson.

*Not used in final version of film