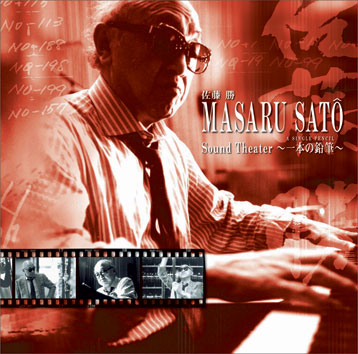 Composer of 308 film scores, Masaru Sato is one of Japan's most well-known and respected composers. As a testament to Sato's illustrious career, this album represents a collection of his best film scores, highlighted by new world premier recordings performed by the Shanghai Symphony Orchestra in glorious stereo sound. While most of the new recordings were performed faithfully from the original score manuscripts, some cues had to be reconstructed by ear, as no copies of the original scores exist.

Disc 1 represents Masaru Sato's distinguished film music career in chronological order. This disc also includes two vocals performed by Sato's widow Chieko Sato- a noted chanson singer- as well as the world premier recording of To Rumoi's Sea, an orchestral piece written for a documentary that was shown in an exhibition in Sato's hometown of Rumoi, Hokkaido. Disc 2 consists of more premier recordings, and is highlighted by a live recording from the "2nd Itami Film Festival Masaru Sato Concert," which was conducted by Sato himself.
20 pages of booklet.

Masaru Sato was born in 1928 in Rumoi, Hokkaido Japan. A graduate of the National Music University in Tokyo, he was a student of famed Seven Samurai composer Fumio Hayasaka. Sato's debut film score, Santa and Chiyonoyama was co-composed with Hayasaka. Thereafter, he composed music for over 300 films for Japan's most distinguished directors, including Akira Kurosawa (Yojinbo and Red Beard, among others), Kihachi Okamoto (Dokuritsu Gurentai and Nikudan), Tokihisa Morikawa (the Wakamono Tachi series), Yoji Yamamoto (Kazoku and Shiawase No Kiiroi Hankachi), Satsuo Yamamoto (the Men and War series and Nomugi Pass), and Hideo Gosha (Yokiro, Yakuza's Ladies and his last work, After the Rain- Apres La Pluie). Sato also composed music for the documentary film Ooinaru Kurobe, and the TV dramas Band of Assassins (1966-67), Sanishimai (1967), and Taikohki (1987). Furthermore, he scored the LaserDisc documentary Poetry of Africa, a stage play Holland Oine, folk music such as Hibari Misora's A Single Pencil, and the original symphonic pieces To Rumoi`s Sea, and Overture of the North. 
@

Sato has received numerous awards including the Japanese Academy Award for Best Composer 3 times, as well as the Mainichi Film Concours award for Best Music on 3 occasions. He died of illness on December 5th, 1999, and is survived by his wife Chieko.