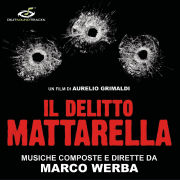 Yes, my collaboration with Marco Werba has been going on for more than ten years! I am an objectively “dangerous” director for music, having an amateurish yet very passionate music education (I’ve even been born on November 22nd, that is Saint Cecilia’s day) and I'm very fond of Baroque music and easy-listening Italian music of the 60s (somebody states there’s some kind of link between them). Marco is a very versatile musician, so good at establishing an empathy with the director, in this case an intriguing one, caring of every single note and also inextricably linked to his long time music collaborator, Maria Soldatini: authoress of a few compositions for “IL DELITTO MATTARELLA”. Just like that, we have a very assorted soundtrack, with 17th-century composer, Henry Purcell, Caterina Caselli and Lara Saint Paul, Marco Werba and Maria Soldatini, and also a piece of music offered by our friend Louis Siciliano. In all of this, it was a really nice experience recording the film score with the “Orchestra del Teatro “Cilea” of Reggio Calabria, with Pasquale Faucitano and his wonderful collaborators, in Antonello Bruzzese’s magnificent studio in Gioia Tauro.A big thanks goes also to Luca Poletti who arranged some of Maria Soldatini’s compositions, getting immediately the mood of those tracks.Long life to Cinema, long life to Music. It’s impossible to live without them!


This is Aurelio Grimaldi’s fourth film which I’ve had the pleasure to work for. I met Aurelio thanks to Antonella Salvucci and Raffaele Mallucci and we worked together for the first time on the historical drama “Anita, una vita per Garibaldi”, an intense movie that describes the love story between Brazilian rebellious Anita and Italian hero, Giuseppe Garibaldi. We then continued our collaboration with “Il sangue e caldo di Bahia” and “Controtempo”. This new film, “Il Delitto Mattarella”, marks the return of Aurelio Grimaldi with an important political movie, with a storyline dense of political plots, Mafia and right-wing subversive groups that brought terror in the Italy of the 80’s. Specifically, Mafia, that turned out to be the main culprit for the death of many honest men that tried to stop the advancement of “Cosa Nostra”, the criminal organization that grew within the Sicilian social fabric. Aurelio is a sensitive director, who knows how to enhance music, measuring it in key moments. For this movie I worked again with Aurelio Grimaldi’s faithful collaborator, Maria Soldatini, who wrote the additional music of the film, and Louis Siciliano kindly gave us a nice composition that we used in two scenes of the film. We recorded the film score in Gioia Tauro with the “Orchestra del Teatro “Cilea” of Reggio Calabria, in Antonello Bruzzese’s “Metro Records Studio”. I’ve had the pleasure of working with top level soloists such as Pasquale Faucitano (Violino), Pierluigi Marotta (Cello), Giampiero Cannata (Horn), Riccardo Rocchi (Guitar) and Federica Inson (Flute). I also had two valid collaborators: Luca Poletti (music assistant) and Enrico Fallea (copyist). The film score of “Il Delitto Mattarella” contains an obsessive rithmic theme (L’Aquila), an intriguing and turbid composition (Corleone), a theme linked to the main character (Piersanti Mattarella) and another one that describes the Sicily of the 80’s.