DAY OF THE DOLPHIN, The (Complete) 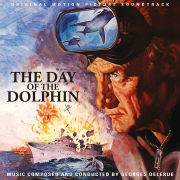 From 1966 to 1971, Director Mike Nichols stormed the gates of Hollywood with a quartet of star-powered feature films that defined a generation. WHO’S AFRAID OF VIRGINIA WOOLF?, THE GRADUATE, CATCH-22 and CARNAL KNOWLEDGE each secured Nichols’ reputation as a respected auteur with a perceptive eye for human drama, a darling among the blossoming legion of actors of the time and critics hungry for relevant cinema.

In 1973, Nichols shifted gears with THE DAY OF THE DOLPHIN, an ambitious, big budget thriller based on the French novel by Robert Merle. Produced by Joseph E. Levine for Avco Embassy, the film starred George C. Scott as a marine biologist whose offshore efforts in teaching the English language to dolphins unravels into a plot to assassinate the President of the United States. Despite its offbeat premise, the film was a potent exercise in ‘70s Watergate-style paranoia and corporate cynicism much like THE PARALLAX VIEW and other socio-political thrillers of the era.

Written by Nichols’ longtime friend and collaborator, Buck Henry, THE DAY OF THE DOLPHIN boasted one of the finest pedigrees of any release that year, including director of photography William Fraker, production designer Richard Sylbert, editor Sam O’Steen and noted French composer, Georges Delerue (Nichols alternate choice after offering the film to Bernard Herrmann).

Though unfairly savaged by critics and ignored by audiences, the film quickly sunk from theaters, though later gained a devoted following among baby boomers through multiple TV viewings during the ‘70s and ‘80s..

Despite the poor reception, one key element of the film received unanimous accolades: Delerue’s stunningly heartfelt score, which channeled the spirit of Vivaldi through his own gentle musical voice. Delerue’s sweeping lyricism gave the film’s innocent mammals, christened Alpha and Beta, a musical heartbeat and a heartbreaking voice, intertwined with the darker sounds of intrigue and deception. The score would rightfully earn Delerue both Oscar and Golden Globe nominations.

Delerue himself produced the original LP in 1974 (later released on CD in Japan in 1991), choosing to present 30 minutes of his score out of sequence to provide an alternate musical flow. Now appearing on CD for the first time in the U.S., Percepto presents every note of Delerue’s score as it was heard in the film, newly remastered by Doug Schwartz at Mulholland Music, plus bonus tracks not heard in the film or on the previous releases.

This lavish deluxe edition also presents the most exhaustively researched notes in our label’s history by film music journalist, Daniel Schweiger, plus a wealth of full-color photos and poster art, including many never-before-published.

Percepto is proud to celebrate our 10th anniversary and 25th release with this superb masterpiece, rightfully considered one of the true crown jewels from Delerue’s prestigious career.

This release is being issued in a limited edition of 1,500 copies.
IN STOCK MID-NOVEMBER. Pre-orders now being accepted!