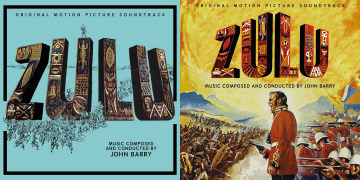 Quartet Records presents a completely restored, remastered, slightly expanded edition of the magnificent score by John Barry (THUNDERBALL, THE LAST VALLEY, BODY HEAT, OUT OF AFRICA) for Cy Enfield’s classic epic ZULU (1964), starring Stanley Baker, Jack Hawkins, Lilla Jacobsson and Michael Caine. The film is about the Battle of Rorke’s Drift, an heroic moment for the British army in the aftermath of a massacre that had occurred just hours earlier at nearby Isandlwana, a British outpost near the Natal-Zululand border in eastern South Africa.For one of his earliest blockbuster efforts for the big screen, John Barry provided an exemplary score based on a single theme, introduced in the opening title sequence, with stirring brass and powerful percussion figures. Despite being a 138-minute epic, the film contains no more than 20 minutes of original music, carefully spotted and cleverly scored. For the album released by Ember Records in 1964, Barry decided to include practically the entire underscore on Side A, augmenting it with six contemporary songs and arrangements on Side B. Barry turned his main Zulu theme into “Monkey Feathers,” with electric guitar and some exotic-sounding piccolo, and one of the Zulu wedding songs, heard during the early part of the film, into “Zulu Stamp.”The successful original album, released by Ember in the UK and United Artists Records in the USA, has been reissued multiple times on LP and CD. Interestingly, the stereo and mono versions of the LP present alternate mixes and even different takes of many cues. For this new Quartet release, we have included both versions from first-generation album masters provided by Cherry Red Records from the Ember Records vaults, all painstakingly remixed, restored, assembled and mastered by Chris Malone. Also, after an extensive search through the film’s many different owners through the years, we were able to find (thanks to Paramount Pictures) a D/M/E track from which we can offer the Main and End Titles without Richard Burton’s narration, as well as one minute of original Barry music not included in the Ember album.The lavishly designed full-color 24-page booklet includes an in-depth essay by film music writer and Barry expert Jon Burlingame.---from the label.

The Original Soundtrack Album in Stereo

The Original Soundtrack Album in Mono