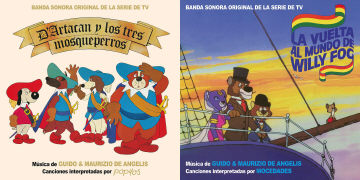 LA VUELTA AL MUNDO DE WILLY FOG is based on Jules Verne’s Around the World in Eighty Days, but here all the charming characters are animals. The De Angelis brothers wrote a number of catchy songs that were performed by the famous pop group Mocedades, highlighting the main opening song that became an immediate classic on Spanish TV. The score was based, mainly, on variations of those songs and instrumental versions of them.

D’ARTACAN Y LOS TRES MOSQUEPERROS was another success and is based in the Alexandre Dumas’ masterpiece Les trois Mousquetaires, with all the characters being dogs. The music followed the same treatment, with several songs performed by Popitos, and variations on these as a background score.

Although these two TV series were dubbed into several languages around the world (in English, Italian, French, etc.) and some albums and singles were released elsewhere with dubbed versions of the songs, we have included here only in the original Spanish versions as they were originally conceived. This CD has been mastered by Chris Malone from original master tapes provided by Sony Music and Divucsa, and the illustrated package includes liner notes by Gergely Hubai.
Limited 300 copies