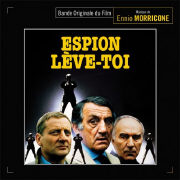 Shortly after Le Professionnel (Georges Lautner, 1981), Ennio Morricone composes the score for another French film, Espion, leve-toi (1982), directed by Yves Boisset, with whom he already worked on L'Attentat (The French Conspiracy, 1972). Even if both films have common points, apart from the dialogue written by Michel Audiard (secret services, main character menaced and then crushed by the system, tragic end), it is not the case about the soundtrack.

Through three main themes, the composer creates a tense atmosphere but always accessible. The powerful track Marche en la, through many versions, sustains the movie in moments of action and menace. Sweet and sentimental, the theme in Melodie pour Anna and Bugle pour Anna accompanies the woman, but also the fragility, the human and conjugal sides of the main character played by Lino Ventura, into two very different variations. The third theme, with a slow tempo and low tones, carries the mystery, the meanders of the Secret Services and its underlying menace.

As often in Morricone's music, the tones are important and each instrument brings a peculiar color although perceivable over the orchestra, although in a coherent whole. Here the special atmosphere is played by the Oscar Valdambrini's flugelhorn (present in the three themes), the pianoforte, the bassoon, the percussion and the flutes.

The original LP issued in 1982 contained ten tracks including the song Cancion del Fuego not composed by Morricone and the track (Ombres suspendues) coming from the film Le Secret (Robert Enrico, 1974), which is not included in this present edition. In 2000, the Screen Trax CD release contained sixteen tracks, but without featuring the song. Thanks to a new stereo master tape found in Italy, this new Music Box Records release, supervised and mastered by Claudio Fuiano and Daniel Winkler, presents the most complete version of Espion, leve-toi, including the song and three never-before-released tracks. A nice occasion to rediscover the score with improved sound.
- from the label.
Remastered Re-issue. Limited 500 copies.