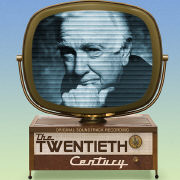 Kritzerland is proud to present music from the classic television documentary program:

On October 20, 1957 CBS premiered a new documentary show hosted by Walter Cronkite. The show was called The Twentieth Century and it had a pretty great nine-year run until 1966, when the show’s name and focus was changed to The 21st Century, and instead of looking backwards at past events, it looked forward to the future and what might be in store for the world and the people who inhabit it. That lasted three seasons, until 1970.

The Twentieth Century covered many important events from around the world, and also did profiles of famous people, from world leaders to those in the arts, people like Winston Churchill, Mussolini, The Windsors, Gandhi, Wernher von Braun, Haile Selassie, Peron and Evita, Woodrow Wilson, Pearl S. Buck, Harold Arlen, Jack L. Warner, James Doolittle, T.S. Eliot, Ernest Hemingway, Harpo Marx, Man Ray, Alice B. Toklas, Brendan Behan, Frank Lloyd Wright, Dave Brubeck, and many, many other historically important people. Some of the events and topics covered included the Nuremburg trials, the atomic age, the Middle East, the F.B.I., the Russo-Finnish War, drug addiction, juvenile delinquency, the early talkies, the race to the moon, the fall of China, the Olympics, the history of world’s fairs, Duke Ellington’s Japanese tour, to name but a few of the wide range of stories they did.

One of the places where the show truly excelled was in its choice of composers for the series, which included not only film composers but classical composers. Laurence Rosenthal, George Antheil, Franz Waxman, Darius Milhaud, Georges Auric, Morton Gould, Mario Nascimbene, Alan Hovhaness, Elie Siegmeister, Harold Shapero, Gail Kubik, Alexander Tcherepnin, Ulysses Kay, Paul Creston, and more, all provided scores for the program.

The selections on this CD are from the show’s second season, save for one score from the first season, taken from 1/4-inch tapes. Ace mastering engineer, James Nelson, has done a great job making this sound as good as its ever going to. So, here is music from the Golden Age of Television by the likes of George Antheil, Gail Kubik, Darius Milhaud, Paul Creston, and Harold Shapero.

THE TWENTIETH CENTURY is limited to 500 copies only.