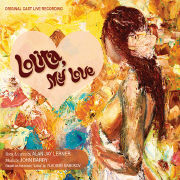 Kritzerland is proud to present a new 2-CD set, a live soundboard recording of the infamous musical:
LOLITA, MY LOVE
Music by John Barry Lyrics by Alan Jay Lerner

Lolita began life as a novel by Vladimir Nabokov. The Stanley Kubrick film was released in 1962. The film was praised and damned by critics but has endured as a Kubrick classic. And then Alan Jay Lerner got it into his head that Lolita should become a musical. Novelist Vladimir Nabokov gave his blessing, and in so doing he said, “Mr. Lerner is most talented and an excellent classicist. If you indeed have to make a musical version of Lolita, he is the one to do it.” Lerner chose film composer John Barry to write the music, and Barry proved to be an excellent choice. In addition to his film scores (all the great early Bond films, The Lion in Winter, The Ipcress File, Born Free, Dances With Wolves, Out of Africa, Somewhere in Time, Midnight Cowboy, etc.), Barry had already written for the stage with his musical of Passion Flower Hotel back in 1965.

The show was contentious from the start, with much behind the scenes drama during rehearsals, and then during the out-of-town tryouts. Philadelphia was a four-star disaster, with terrible reviews pretty much across the board. The production shut down after its first performance, fired its director and choreographer and the girl playing the title character. The production then traveled to Boston, where the critics were a little kinder, but audiences stayed away in droves. The New York opening at the Mark Hellinger Theater was cancelled. John Barry recorded a few of its songs on different albums, but sans lyrics ? a few of the songs also had vocal recordings.

The orchestrations were by the great Eddie Sauter and the dance arrangements were by John Morris. There was an LP with terrible sound from a soundboard recording that was a copy of a copy of a copy. But it whetted the appetite of flop show lovers everywhere, because the score is filled with wonderfully tuneful songs and some terrific Lerner lyrics. The haunting title song, the beautiful “In the Broken Promise Land of Fifteen” (which had been recorded by several people, including Robert Goulet), “Going, Going, Gone” (recorded by none other than Shirley Bassey), and the absolutely gorgeous, “Tell Me, Tell Me.”

Back in the 1970s, producer Bruce Kimmel came into possession of a complete soundboard tape in pretty decent sound. And it is from that tape, possibly first generation, from which this CD has been mastered. For this release, all the major songs have separate tracks and all the dialogue has separate tracks. That way, one can program the CD however they like ? just the score or hearing it all. Mastering engineer, James Nelson, has worked his magic, smoothing out the levels and making it all of a piece.

So, hear it is ? the infamous Lolita, My Love, a surprisingly strong show with a really top-notch score. LOLITA, MY LOVE is limited to 500 copies only