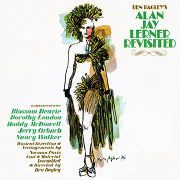 Kritzerland is proud to present a reissue of a great musical theatre CD :

It’s high time to revisit the Ben Bagley’s Revisited series, beginning with this wonderful example ? Alan Jay Lerner Revisited. Bagley’s revues were kicky fun and these albums were a natural offshoot of them. He always assembled an interesting group of singers for his albums and had a variety of different musical directors/arrangers over the years. This is the first of several reissues of his classic albums, with many more to come.

For this album, the cast is absolutely stellar and the Norman Paris orchestrations are wonderful and well suited to the material. These are not the Lerner hits ? these songs are undiscovered gems (especially at the time of the recording) from The Day Before Spring, Love Life, Lolita, My Love, What’s Up, Give a Girl a Break, a cut song from Gigi, and much more. As was his wont, Bagley added bonus material for the CD release, which we also include.

The Bagley CDs were not especially well mastered so we have done a lot of work to spruce them up with our wonderful mastering engineer, James Nelson, doing his customary great work. They sound better than they ever have before. And of course it’s wonderful to have all those incredible Harvey Schmidt covers. There are all new liner notes and lovely packaging. All these CDs are long out of print ? recently there have been a couple of CD-R issues of a few (none that we’re doing), but those have no remastering or packaging. Most of the out of print titles, including this one, go for big money, so it’s great to make these available at our regular price.

ALAN JAY LERNER REVISITED is limited to 500 copies only