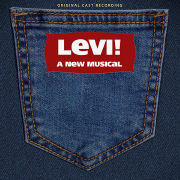 Music and Lyrics by Richard M. Sherman and Robert B. Sherman
Book by Larry Cohen and Janelle Webb Cohen

It would seem nigh unto impossible to produce a new Sherman Brothers musical in the year 2017 but sometimes nigh unto impossible things happen and dreams come true. The musical was and is called Levi! It was written in the very late 1970s but never produced. Not only did it have a score by one of the most legendary songwriting teams in history (Mary Poppins, The Jungle Book, Chitty Chitty, Bang Bang, “It’s a Small World”), it had a book by the cult screenwriter/director, Larry Cohen (and then-wife, Janelle Webb Cohen), who had, a few years earlier, unleashed the world’s first mutant killer baby movie, It’s Alive. The show was about the life of Levi Strauss, the man who gave the world Levi pants. From his coming to America as a penniless immigrant to finding the greatest success imaginable and truly achieving the American Dream.

The 1980s were difficult for the Sherman Brothers and the heartbreak of Levi! sitting unproduced was, yes, heartbreaking. But now, at long last, that wrong has been righted. The show, with a revised book and some additional material, opened on November 17, 2017 in the Camino Theatre on the campus of Los Angeles City College. The audiences loved the show - there were laughs and tears and cheering and standing ovations at every performance. The production had a great set, fun choreography, beautiful costumes, terrific orchestrations, wonderful lighting and sound - and a great performance by leading man, Marc Ginsburg, who was simply born to play Levi Strauss.

The story of Levi Strauss resonates today in a way it didn’t back when the Sherman Brothers and Larry Cohen and Janelle Webb Cohen had written it. It is more timely and relevant now than ever in its story of immigrants being given a chance to make good, in its depiction of horrible racism, and in its depiction of an honest, principled who made the world a better place. Oh, and those Sherman Brothers songs. There wasn’t one person in any of the audiences that didn’t leave humming the show’s anthem and theme, “Opportunity.” In fact, the score is classic Sherman Brothers, filled with catchy, hummable tunes and lyrics that illuminate character and story. It’s a big, old-fashioned musical, the kind you don’t see much anymore - with a musical’s most important attribute: Heart.

Levi! was recorded live in the Camino Theatre and we’re beyond thrilled to give it a CD release.

Levi! is limited to 1,000 copies only -KRITZERLAND

This item has a planned release date of Mid January. Pre-orders now being accepted!