THE SNOWS OF KILIMANJARO 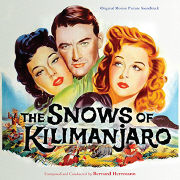 THE SNOWS OF KILIMANJARO

In 1952, Twentieth Century Fox memorably brought Hemingway’s The Snows of Kilimanjaroto the screen in a lavish production directed by Henry King, with a screenplay by Casey Robinson, starring a stellar cast including Gregory Peck, Ava Gardner, and Susan Hayward, along with Hildegard Knef, Leo G. Carroll, and Torin Thatcher. The beautiful cinematography was by Oscar-winner Leon Shamroy.

With stunning location photography in Nairobi, Kenya, Cairo, Egypt and the French Riviera, the film was a Technicolor dazzler. The film was one of Fox’s biggest hits, earning huge grosses. It was nominated for two Academy Awards - one for Best Cinematography, Color and one for Best Art Direction, Color.

There could not have been a better choice for composer than Bernard Herrmann, who gave the film his completely unique sound and sense of drama. Herrmann had already written many scores for Fox films, including Jane Eyre, Hangover Square, Anna and the King of Siam, The Ghost and Mrs. Muir, The Day the Earth Stood Still, and 5 Fingers, and subsequent to The Snows of Kilimanjaro he would continue to compose brilliant scores for the studio, including White Witch Doctor, Beneath the 12-Mile Reef, King of the Khyber Rifles, Garden of Evil, The Egyptian (with Alfred Newman), Prince of Players, The Man in the Gray Flannel Suit, A Hatful of Rain, Blue Denim, Journey to the Center of the Earth, and Tender Is the Night.

In his score for The Snows of Kilimanjaro, Herrmann captures all moods of the story, from nostalgia to sadness to joy to romance. The music is achingly beautiful, most especially in the sublime “The Memory Waltz.” As always with Herrmann, his orchestral colors are uniquely his own (as are his orchestrations), and even though with most Herrmann scores you can easily say it’s one of his best, The Snows of Kilimanjaro is right up there with his greatest.

The Snows of Kilimanjaro was previously released as part of the Bernard Herrmann at Fox box on Varese Sarabande. This is the scores’ first standalone release.

The Snows of Kilimanjaro is limited to 1000 copies only. ---Kritzerland.