THE FAR HORIZONS / SECRET OF THE INCAS 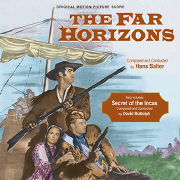 THE FAR HORIZONS
Music Composed and Conducted by Hans Salter

SECRET OF THE INCAS
Music Composed and Conducted by David Buttolph

Two movies from the Golden Age, both starring Charlton Heston, a double bill in the old style - well-made pictures designed solely to entertain.

The Far Horizons holds the distinction of being the only major motion picture made about the Lewis and Clark Expedition. Based on a fictional novel by Delia Gould Emmons, the film combined fact and fiction in its depiction of the two-year expedition. Heston played Lt. William Clark; co-starring as Captain Meriwether Lewis was Fred MacMurray. The director was Rudolph Mate, and the film was shot in gorgeous Technicolor and Paramount’s then-new widescreen process, VistaVision, by Daniel Fapp. And it has a terrific score by Hans J. Salter.

For a composer whose name is rarely included among the top composers for film, Hans J. Salter scored an amazing number of beloved horror and sci-fi films, including Man Made Monster, The Black Cat, The Wolf Man, Frankenstein Meets the Wolf Man, Son of Dracula, House of Frankenstein, Creature from the Black Lagoon, This Island Earth, The Mole People and The Incredible Shrinking Man, but he was equally at home in every genre and wrote great scores for such diverse films as Hold That Ghost, Fritz Lang’s Scarlet Street, The Strange Affair of Uncle Harry, Magnificent Doll, The Reckless Moment, Against All Flags, The Black Shield of Falworth, Autumn Leaves, Hold Back the Night, Come September, If a Man Answers, and Bedtime Story, to name but a few from his extraordinarily prolific career. And he also scored a number of western and adventure films, including Bend of the River, The Far Country, Man Without a Star, Wichita and many others.

His score for The Far Horizons is a majestic beauty, with a wonderful main theme that gets plenty of variations, along with some great dramatic scoring. For this CD, we present all the surviving cues, which thankfully constitute most of the score. It’s movie music in the grand tradition - full-bodied, emotional, and filled with melody. The score is presented in mono.

Here’s the plot for Secret of the Incas: A legend says that the Inca Empire was destroyed by the gods when a starburst of gold and jewels was stolen from the Temple of the Sun many centuries ago. The legend continues that the empire will be reborn once the treasure is returned. Now, an adventurer is seeking the treasure, as is his nemesis. The adventurer wears a brown leather jacket, a fedora, tan pants, and an over-the-shoulder bag and revolver. Sound familiar? Can we say Indiana Jones? But this was 1954, and the adventurer was Harry Steele, played by Charlton Heston. Secret of the Incas was definitely an inspiration for the Indiana Jones series. It was and is a fun picture. Shot on location in Peru at Cuzco and Machu Picchu (the first major Hollywood film to shoot at those locations), with a great cast that, in addition to Heston, included Thomas Mitchell, Robert Young, Nicole Mauray, and the then very popular exotic singer, Yma Sumac. Helping to make it so much fun is the film’s musical score by David Buttolph.

Like Hans J. Salter, David Buttolph is a bit of an unsung film composer. Buttolph, over the course of his extremely prolific career, scored hundreds of films, including some pretty great movies such as This Gun for Hire, The House on 92nd Street, Somewhere in the Night, 13 Rue Madeleine, The Brasher Doubloon, Kiss of Death, The Enforcer, House of Wax, The Beast from 20,000 Fathoms, Phantom of the Rue Morgue, Long John Silver, The Lone Ranger, The Horse Soldiers, and PT 109. He also moved into television scoring, working on such series as Laramie, Wagon Train and The Virginian.

Buttolph’s score for Secret of the Incas is exotic and adventure-filled like the film. Because of Yma Sumac’s involvement, it was decided to use a piece of music that was from one of her albums, specifically “High Andes” by Moises Vivanco, which Buttolph uses sparingly. Otherwise, Buttolph has memorable themes of his own, underscoring all the adventure, romance and thrills. For this CD we present all the surviving film cues in glorious stereo sound.

THE FAR HORIZONS/SECRET OF THE INCAS is limited to 1000 copies only. - KRITZERLAND

SECRET OF THE INCAS