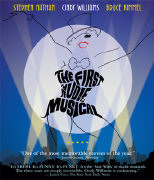 Originally released by Paramount Pictures in 1976, the film garnered excellent reviews but in a bit of unfortunate timing, Cindy Williams’ series, Laverne and Shirley (also produced by Paramount) went on the air and became a family-hour smash. After a year, the film was purchased by another distributor in New York and, in 1977, The First Nudie Musical re-opened and was reborn, again garnering mostly rave reviews, playing exclusively in one theater for over three months, and, in its first week of wide release, becoming the fourth highest grossing film in the United States (right under Star Wars and The Spy Who Loved Me). The film became one of the first cable hits, playing on various pay cable stations all throughout the 1980s, and during that time the video was released and also became a best-seller, making the Billboard chart.

The First Nudie Musical was released on DVD in 2002. That release was cobbled together from the then-best elements available - three 35mm prints that had retained about 60% of their color. That transfer was the best it could be given the technology back then, but there were the inevitable splices and scratches, and color that was okay but not great. Between then and now, the low-budget film’s CRI (internegative) was found (the camera negative is lost). Fortunately, it was in excellent condition and only one generation away from the camera negative. It yielded a wonderful image and the color is now wholly accurate to the way the film was originally shot.

The 35th anniversary edition of The First Nudie Musical is loaded with extras - a retrospective documentary co-directed by Academy Award-nominee Nick Redman, three commentary tracks - two for the film (one with Cindy Williams, Stephen Nathan, and Bruce Kimmel, and one with Nick Redman and Bruce Kimmel), and one for the documentary (Nick Redman, Michael Rosendale, and Bruce Kimmel). Additionally, there’s a deleted scene, two deleted musical numbers (one with sound and picture, one with audio only), two theatrical trailers, a radio spot, costume tests, and a stills gallery.

IN STOCK after early November. Pre-orders now being accepted!