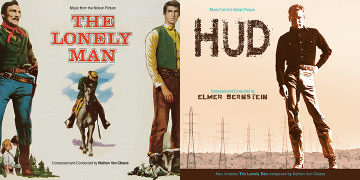 OUT OF PRINT CD. Kritzerland is proud to present a world premiere limited edition soundtrack release - two great scores on one great CD:

THE MAN WITH THE BARBED WIRE SOUL

Based on the 1961 novel Horseman, Pass By by Larry McMurtry (The Last Picture Show, Terms of Endearment), Hud featured a powerhouse cast - including Newman, Melvyn Douglas, Patricia Neal and Brandon de Wilde. With a great screenplay by Irving Ravetch and Harriet Frank Jr., direction by Martin Ritt, and striking black-and-white photography by the brilliant James Wong Howe, Hud leaps off the screen from first frame to last. Bosley Crowther’s review in The New York Times was typical, trumpeting Hud as the year’s “most powerful film.” The film was nominated for seven Academy Awards and won three - for Best Actress (the superb Patricia Neal), Best Supporting Actor (Melvyn Douglas) and Best Cinematography (James Wong Howe).

Elmer Bernstein’s score for Hud runs approximately six minutes, making it one of the shortest film scores ever. But what a six minutes it is - in fact, it’s perfection and just right for the film. Bernstein recorded his six minutes twice: once with a 12-piece ensemble, and then, a week later, re-orchestrated (by Bob Bain) for three guitars. Presumably the revision was at Ritt’s request for a smaller and even more intimate sound - which really was the right choice. The music is sparse, yes, but it’s potent every time it appears. There’s also some source music in the film - car radios, jukeboxes, records.

For this first ever release of the score to Hud, we present not only the film version of the score, but also the alternate version scored for chamber orchestra, as well as some source music cues and Bernstein’s work for the trailer. It was a wonderful discovery to find it on the session masters housed in the Paramount vaults, and the tapes were in excellent condition.

In looking for something to pair with Hud, we found a truly beautiful score by Nathan Van Cleave for the 1957 western The Lonely Man. Starring Jack Palance and Anthony Perkins (with a great supporting cast of character actors including Elisha Cook Jr., Robert Middleton, Neville Brand, Claude Akins and Lee Van Cleef), The Lonely Man is a stark and somber western about a former gunslinger and his attempts to do something for the son who hates him and from whom he’s been estranged for years. Well directed by Henry Levin (April Love, Journey to the Center of the Earth, Where the Boys Are, The Wonderful World of the Brothers Grimm) and stunningly photographed in VistaVision and black-and-white by Lionel Lindon, The Lonely Man may not be well known today, but it’s a solid film and one well worth seeking out.

Nathan Van Cleave’s score is a major discovery, as you’ll hear on this CD. Van Cleave had been at Paramount for years, orchestrating some of their biggest hits. But he was also an expert composer, and over the years he turned in wonderful scores for such films as The Colossus of New York, The Space Children and Robinson Crusoe on Mars, and provided music for such classic TV shows as The Twilight Zone, Wagon Train, Have Gun - Will Travel, Perry Mason and I Spy.

For The Lonely Man, Van Cleave came up with a beautiful main theme, for which Jack Brooks provided lyrics; Tennessee Ernie Ford sings the song in the film. The score has real depth and its secondary themes are dramatic, elegiac and poignant, giving the film a strong spine. The Lonely Man is a world premiere release on CD and is presented complete from tapes housed in the Paramount vaults. A few cues were taken from the music stem. We hope you’ll enjoy discovering this really terrific music.

Hud/The Lonely Man is limited to 1000 copies only.

THE LONELY MAN
11. Paramount Seal/Prelude/The Lonely Man* (sung by Tennessee Ernie Ford)
12. The Prodigal Father*
13. The Trek Part 1*/Burn and Beware*/The Cold Deck
14. The Trek Part 2*
15. The Trek Part 3*
16. Scorned at the Stable/Hate Makes Him Evil
17. The White Stallion*/Ada’s Advice*
18. Losing the Stallion*
19. Signs of Blindness*
20. Still the Boss*
21. The Informer/The Canvas Corral*/ First Fight at the Canvas Corral
22. Something to Think About/Into a Trap
23. Then There Were Two/To the Rescue With Love
24. The Deserted Bonanza
25. Tension at the Bonanza*
26. Death at the Bonanza/Finale*
27. The Lonely Man* (sung by Tennessee Ernie Ford)
Composed and Conducted by Nathan Van Cleave
*Contains “The Lonely Man” by Jack Brooks and Nathan Van Cleave