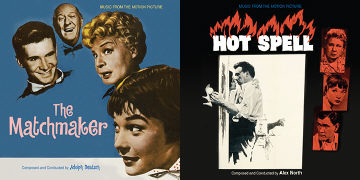 How many women star in their first movie at age fifty-four - and win an Oscar for doing so? Well, that’s what happened to Shirley Booth when she made her film debut for Paramount, reprising her Tony Award-winning role in William Inge’s Come Back, Little Sheba. Booth had already had a hugely successful theatre career and stage work is what she preferred, making only a total of five films before going on to become a TV star in the hit series Hazel. She made her final two films in 1958 and both of them are represented on this world premiere CD release.

Hot Spell had a powerhouse cast; in addition to Booth, the film starred Anthony Quinn, Shirley MacLaine, Earl Holliman and Eileen Heckart. The film’s screenplay by James Poe is clearly in Tennessee Williams and William Inge territory. Booth has a field day with her role - delusional, flighty, and eternally optimistic in the face of the drama around her. Quinn is powerful in his role as someone who doesn’t want to be clung to and whose mid-life crisis results in tragedy for everyone. MacLaine was wonderfully fresh and unique at this point in her career - there wasn’t anyone else quite like her working in movies - and Holliman and Heckart both shine.

The score for Hot Spell was by the brilliant Alex North. By that point in his career, North had been composing for Hollywood films since 1951, when he came out swinging with three incredible scores - The 13th Letter, A Streetcar Named Desire and Death of a Salesman (he received Oscar nominations for both Streetcar and Salesman). North’s Hot Spell score is all yearning, delusion and heartbreak. His music brilliantly illuminates the drama and the characters - their hopes, their dreams, their heartaches. Thanks to North and the actors (as well as the excellent writing and directing), what could have easily devolved into a melodramatic potboiler becomes a compelling character-driven drama.

Shirley Booth’s other star turn that year was the polar opposite of Hot Spell: the delightful film adaptation of Thornton Wilder’s popular stage success, The Matchmaker. Paramount brought it to the screen, starring Booth as Dolly Gallagher Levi, Paul Ford as Horace Vandergelder, Anthony Perkins as Cornelius, Shirley MacLaine as Irene, and Robert Morse reprising his stage role as Barnaby. The screenplay was by the great John Michael Hayes (Rear Window, The Man Who Knew Too Much) and the film was directed by Joseph Anthony, who, the year before, had brought the play The Rainmaker to the screen for Paramount. Of course, it would be just a few years later when The Matchmaker would undergo yet another transformation, this time being turned into a big, splashy hit Broadway musical, Hello, Dolly!

Helping the fun immeasurably is the score by Adolph Deutsch, which captures the homespun Americana beautifully. His music includes quotes from traditional music of the era (“Buffalo Gals”), but is also filled with his own wonderful, melodic themes. Deutsch wittily underscores the monologues of various characters delivered straight to the camera, or budding love, and Dolly’s machinations to bring everyone together in blissful happiness - including her own. Adolph Deutsch was a really unsung film composer, especially considering the large number of huge hit films he worked on. Although his name is not that well known today, he wrote some absolutely stellar scores during his long career, including the music for such all-time classics as They Drive by Night, High Sierra, The Maltese Falcon, The Mask of Dimitrios, Father of the Bride, Tea and Sympathy, Some Like it Hot and The Apartment.

So, two great Golden Age scores - one steamy and tragic, one charming and delightful - by two great composers: Alex North and Adolph Deutsch.

Hot Spell/The Matchmaker is limited to 1000 copies only.

The Matchmaker
14. Prelude (Main Title)
15. Soliloquy No. 1 (Mrs. Levi)/Van’s Store/Trap Door
16. Soliloquy No. 2 (The Barber)/ Soliloquy No. 3 (I’ll Give You a Good Day)/ Bloomers
17. Close to His Heart/No Time Off/Chief Clerk/ Hot Tomatoes
18. The Matchmaker Polka
19. Flirtation
20. Bad Weather/Run For Cover
21. Quick Disguise/In Hiding/Soliloquy No. 4
22. Mrs. Levi’s Discovery/No Room for Sneezes
23. The Yonkers Polka
24. A Note to Irene/We Walk to Yonkers
25. Discord in Harmonia Gardens
26. Love and Spirits/Soliloquy No. 6
27. Something Rotten in Yonkers
28. The Proposal/Finale