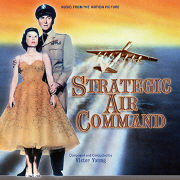 In 1955, Paramount Pictures released the second film in their new VistaVision format -Strategic Air Command. With its extraordinary aerial footage and location shooting, VistaVision would really come into its own. The film was, in a word, breathtaking. Add to that a great cast headed by James Stewart, June Allyson, Frank Lovejoy, Barry Sullivan and Harry Morgan, the great cameraman William H. Daniels, a terrific screenplay by Valentine Davies (book and film of Miracle on 34th Street, The Bridges at Toko-Ri, The Benny Goodman Story, The Glenn Miller Story) and Beirne Lay Jr., and great direction by Anthony Mann (many great noirs, an incredible run of western films starring James Stewart, and the magnificent El Cid), and you had a recipe for success. Strategic Air Command was the sixth-highest grossing picture of 1955. The New York Times’ Bosley Crowther raved, “Never, in many years of looking at Air Force and aviation films, have we seen the familiar wide blue yonder so wide or so magnificently displayed as it is in the VistaVision process used to project Strategic Air Command. But above all, there are those airplanes, the roaring engines, the cluttered cockpits, the clouds and sky. These are the things that make your eyes bug out and your heart leap with wonder and pride.”

And one of the primary reasons the heart leaps with wonder and pride is the film’s stunning musical score by Victor Young. Young’s body of work is astonishing, and includes such great scores as Golden Boy, Reap the Wild Wind, The Glass Key, The Palm Beach Story, The Uninvited, The Great Moment, Ministry of Fear, Love Letters, To Each His Own, Golden Earrings, The Big Clock, State of the Union, The Paleface, The Night Has a Thousand Eyes, Samson and Delilah, Gun Crazy, Bright Leaf, Rio Grande, Scaramouche, The Quiet Man, Shane, Three Coins in the Fountain, Johnny Guitar, The Country Girl, Around the World in Eighty Days, and that is only the very tip of the Victor Young iceberg.

Young’s score for Strategic Air Command is one of his greats. It has everything you’d want in a score - a rousing main title march, beautiful and emotional music for the drama, and, above all, some of the greatest “flying” music ever written for the screen. Young’s scoring of the flying scenes virtually turns those sequences into ballets of flight, a sky symphony of enduring beauty.

This is the world premiere release of Strategic Air Command. The music masters were mono (the film was also mono, but its original engagements used the Perspecta soundtrack, a kind of fake stereo) and mostly in very good condition, housed in the Paramount vaults. A couple of tracks only existed on acetates (which we cleaned up as best we could), and a handful were too damaged to use at all. There have not been nearly enough Victor Young scores released on CD, and we’re especially thrilled to bring out this particular example, as it presents all of Young’s strengths as a film composer and a brilliant melodist. They don’t come much better.

Strategic Air Command is limited to 1000 copies only. - Kritzerland.