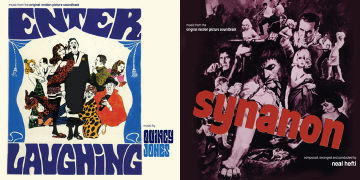 ADDICTED TO COOL - HEFTI AND JONES

Hefti, who began in big band and jazz with Woody Herman and then Count Basie, wrote his first film score in 1964 for Richard Quine’s comedy, Sex and the Single Girl. It was classic Hefti right out of the gate and introduced a fresh, melodic, and, yes, cool voice into film scoring. He followed that with How To Murder Your Wife (released by Kritzerland), which was followed by Synanon. Some of his most famous work lay ahead - the following year he’d work on TV’s Batman, do brilliant scores for two Neil Simon comedy films, Barefoot In The Park and then his iconic music for The Odd Couple, whose theme was also used in the TV series based on the play and film. Hefti’s score for Synanon opens with a moody and evocative main title, and the rest of the score consists of variations on that main theme, along with some swingin’ ups, bluesy ballads, and even a couple of vocals - all in the unique Hefti style and loaded with his usual melodic invention. There was no one like him.

Enter Laughing began life as a semi-autobiographical novel by Carl Reiner, about a young man longing to break into show business. It was adapted for Broadway by playwright Joseph Stein and opened in 1963 to excellent reviews. In 1967, Enter Laughing was brought to the screen, this time written and directed by Reiner himself. The film version starred Reni Santoni, Janet Margolin, Jose Ferrer, Elaine May, Jack Gilford, Don Rickles, Shelly Winters, David Opatashu, and, repeating his stage role, Michael J. Pollard. Enter Laughing is a frequently hilarious movie filled with expert turns by expert actors, especially Ferrer and May, who are both brilliant in the film. Capturing all the fun and spirit of the movie was its score by the great Quincy Jones, another of the cool set of composers from the 1960s.

Jones, like Hefti, started out in big band and jazz as an arranger and composer. And, like Hefti, Jones wrote his first Hollywood film score in 1964, for Sidney Lumet’s The Pawnbroker. He instantly became a sought-after and very prolific film composer, scoring such 1960s films as Mirage, Walk, Don’t Run, The Deadly Affair, In The Heat Of The Night, In Cold Blood, Mackenna’s Gold, The Italian Job, Bob and Mary and Ted and Alice, Cactus Flower and many others, as well as his great theme for the TV series Ironside. The 70s were no less fruitful, producing such great scores as The Anderson Tapes, $, The Hot Rock, The New Centurions, The Getaway, Roots, and, in 1985, The Color Purple. Jones was a completely fresh voice in film scoring - he combined the best of all worlds - big band, jazz, and classic film scoring, into his own unique sound. While his score for Enter Laughing is on the more traditional side, it is infectiously tuneful, fresh as a daisy, and fits the film like a glove. It’s the kind of score no one really knows how to write anymore.

Both Synanon and Enter Laughing were originally released on Liberty Records and this is the first CD release for both. They are mastered from the original two-track album masters housed in the Capitol vaults - they were in pristine condition and both have that spectacular 1960s stereo sound.