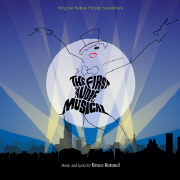 “CHOCKFUL OF YOUTHFUL TALENT, SPICED BY OUTRAGEOUSNESS AND SPARKED BY INVENTION. THE THREE STARS ARE SIMPLY IRRESISTIBLE. CINDY WILLIAMS IS ENCHANTING. KIMMEL IS THE ULTIMATE APPEALING SCHNOOK. FRESH AND FUNNY AND FUNKY. MADE FOR ABOUT 1 PERCENT OF THE BUDGET FOR ‘NEW YORK, NEW YORK,’ AND A HUNDRED TIMES FUNNIER AND MORE PERCEPTIVE. IT’S THE ‘STAR WARS’ OF NUDIE MUSICALS!” Judith Crist, New York Post

Originally released by Paramount Pictures in 1976, the film garnered excellent reviews but in a bit of unfortunate timing, Cindy Williams’ series, Laverne and Shirley (also produced by Paramount) went on the air and became a family-hour smash. After a year, the film was purchased by another distributor in New York and, in 1977, The First Nudie Musical re-opened and was reborn, again garnering mostly rave reviews, playing exclusively in one theater for over three months, and, in its first week of wide release, becoming the fourth highest grossing film in the United States (right under Star Wars and The Spy Who Loved Me). The film became one of the first cable hits, playing on various pay cable stations all throughout the 1980s, and during that time the video was released and also became a best-seller, making the Billboard chart.

The 35th anniversary edition of The First Nudie Musical contains the original soundtrack recording as well as the newly arranged soundtrack to Nick Redman’s documentary, From Dollars To Donuts: An Undressing Of The First Nudie Musical, which has instrumental versions of the Nudie songs arranged by Grant Geissman, composer of Two-And-A-Half Men and Mike and Molly. The booklet contains liner notes by Nick Redman and Bruce Kimmel.