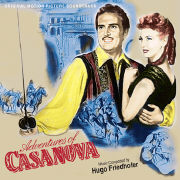 Kritzerland is proud to present a limited edition double-bill soundtrack - two great scores on one CD, both making their CD debut:

THE ART OF LOVE
Music Composed and Conducted by Cy Coleman

A man drives up into the hills overlooking a Los Angeles suburb. He pulls out some legal briefs and then a baton and begins conducting as Dave Grusin’s music accompanies shots of upscale houses from which we hear sounds of the endless bickering of unhappy married couples. Thus begins Divorce, American Style, a classic comedy from 1967 that was a huge hit with audiences and critics. Written by Robert Kaufman and Norman Lear (who received an Academy Award nomination for their work), and directed by Bud Yorkin (the latter two gentlemen would shortly change the face of television forever with All In The Family), the film stars an incredible cast, including Dick Van Dyke, Debbie Reynolds, Jason Robards, Jr., Jean Simmons, Joe Flynn, Shelley Berman, Tom Bosley, Lee Grant, Martin Gabel, Van Johnson, Kritzerland is proud to present a limited edition world premiere soundtrack release:

Adventures Of Casanova presents the legendary womanizer as not only a legendary womanizer but an expert with the blade (sword, that is), champion of the oppressed, and hero for the ages. In other words, Eagle-Lion’s 1948 release is a standard-issue programmer, one of about fifty titles they released that year. Adventures of Casanova stars Arturo de Cordova as Casanova, Turhan Bey as his friend Lorenzo, John Sutton as his enemy, the Count de Brissac, and fetching Lucille Bremer as Lady Bianca and Noreen Nash, as Zanetta, her servant. The film is a swashbuckler, filled with swords flashing, intrigues, double-crosses, switched identities, cowards, an oily villain, and a hero who can out-duel and out-love anyone. But what really makes the film come to life and even occasionally lifts it from its B-movie roots, is the superb score by Hugo Friedhofer.

Friedhofer had spent years as an orchestrator for Max Steiner and Erich Wolfgang Korngold, so he knew this type of film scoring intimately. By 1948, he’d been composing for films for years and had already won the Academy Award for his brilliant score to William Wyler’s The Best Years Of Our Lives. How Eagle-Lion could afford him after he’d won his Oscar is anyone’s guess, but they could and they did and Friedhofer provided the film with a lusty, full-bodied, and wonderful score, very much in the Korngold mold, but unmistakably Friedhofer. This is music in the classic adventure tradition, with sweeping themes for fighting and romancing, intrigue, and villains and heroes.

This is the world-premiere release of Adventures of Casanova. All that existed from this film were a set of acetates that Friedhofer had. Our mastering engineer, James Nelson, has done as much as possible in cleaning up the sound and the result is a classic Friedhofer score finally available for all to hear. Most of the acetates were in really good condition, but acetates are acetates and there is no way around some of the anomalies that are inherent in them - only a couple of cues were in really problematic condition, but we’ve done our best to make those sound as good as they can sound. It is an archival release, but an important one, as have been several other releases from acetates from the Golden Age issued by other labels. We have put the cues in film order, which makes for the best listening experience.

IN STOCK after later August. Pre-orders now being accepted!