UNFORGIVEN, The / THE WAY WEST 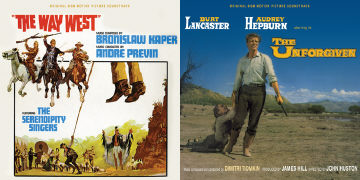 The Unforgiven, based on a novel by Alan Le May (The Searchers) was a serious-minded western directed by John Huston, starring Burt Lancaster, Audrey Hepburn, Audie Murphy, Lillian Gish, and Charles Bickford. It was a film plagued by problems - the original director, Delbert Mann, was replaced by John Huston, who constantly fought with star Burt Lancaster and his production company, Hecht-Hill-Lancaster. The film’s female star, Audrey Hepburn broke her back during filming when she fell from her horse, co-star Audie Murphy almost drowned while duck hunting, and director Huston’s mind seemed to be on other things instead of the actual film he was directing.

But none of those behind-the-scenes dramas really mattered, because at the end of the day The Unforgiven was a handsome film (shot by the great Franz Planer), well directed by Huston, with a riveting story and characters, and wonderfully acted by the large cast. Like Le May’s The Searchers, The Unforgiven has racism as its theme and certainly was, for its time, a very adult western. The film’s reviews were mostly positive, and it is only in the intervening years that the public consensus on the film became wildly divergent, with some professing it to the be the worst film Huston ever did (Huston thought so, too, apparently), and a film that doesn’t work at all, to those who admire the film’s direction, acting, and story, and who find the film a splendid western.

Dimitri Tiomkin was, for many years, the go-to guy for Western scores. His scores for various classic westerns had a true Americana sound to them, and yet remained unique to Tiomkin and his sound - Duel In The Sun, Red River, High Noon, Gunfight At The O.K. Corral, Rio Bravo, The Alamo and many others. Tiomkin had an incredible gift for creating memorable main themes and was a pioneer in the main title as song with High Noon (“Do Not Forsake Me, O My Darlin’”), for which Tiomkin not only won the Oscar for Best Score, but for Best Song (over the years he was nominated for an astonishing 17 Academy Awards). His score for The Unforgiven is classic Tiomkin, with a wonderful, memorable main theme (this time not done as a song, although it later did have lyrics added by Ned Washington), a theme that is haunting, melancholy, and perfect for the film. The rest of the score is filled with the unique Tiomkin sound - crashing brass, xylophones run amok, beautiful strings, and stirring action music - there’s no way not to know it’s a Tiomkin score from first note to last. The score was recorded in Rome with the Santa Cecilia Symphony Orchestra, with Tiomkin conducting.

The Way West was based on a Pulitzer Prize-winning novel by A. B. Guthrie, and is a Western more in the grand tradition; a big, sprawling epic produced by Harold Hecht, with a screenplay by Ben Maddow (who’d also written the script for The Unforgiven) and Mitch Lindemann. The film is colorful, fun, and compelling, as it follows a wagon train of settlers from Missouri as they make their way to Oregon, and, thanks to cameraman William H. Clothier, it is absolutely stunning to look at. Andrew McLaglen was a fine director and he gets terrific performances from his large cast, including Kirk Douglas, Robert Mitchum, Richard Widmark, Lola Albright, Sally Field (in her film debut), Stubby Kaye, and two stalwart western character actors, Jack Elam and Harry Carey, Jr.

The score by Bronislau Kaper has its own Americana sound and is a total delight. It begins with some narration from the film, which segues into a song (with lyrics by Mack David) sung by The Serendipity Singers. Then the score proper begins, and it is filled with rousing action music, playful music, and stunningly beautiful music, all in Kaper’s distinctive style and all of which captures the film’s myriad moods and scenes beautifully. Kaper didn’t do that many westerns, but the ones he did do were really interesting and he was a master craftsman, who, like Tiomkin, had an incredible gift for memorable melodies, as you can hear in his wonderful scores for Invitation, Lili, Auntie Mame, the 1962 Mutiny On The Bounty, among many others.

The Unforgiven was originally released on a United Artists LP, and then as part of a limited edition Film Score Monthly Western CD box set. The Way West was originally issued as an LP on United Artists, and then as a limited edition on CD by Intrada - both releases sold out instantly, and so it’s nice to be able to make them available to those who missed out, those who didn’t even get a chance to find out about them, and fans of great western scores. Both scores have been completely remastered for this release. - Kritzerland

THE UNFORGIVEN
Music Composed and Conducted by Dimitri Tiomkin

1. Prologue
2. The Unforgiven - Main Title
3. Across the Texas Panhandle
4. Turkey In The Straw
5. The Horse Ballet
6. Search for Abe Kelsey
7. Charlie Courts Rachel
8. Kiowa Warpath
9. The Capture of Abe Kelsey
10. The Unforgiven Alone
11. Riding Back to the Soddy
12. Mattilda Confesses
13. The Kiowas Attack
14. After the Battle - End Title