EMPIRE OF THE ANTS 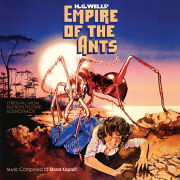 Empire Of The Ants is the first time a score to a film by Bert I. Gordon (affectionately known as Mr. BIG) has come to CD, and this is its world premiere release - in other words, this is a BIG event. Mr. BIG has made some of the most beloved genre films of all time, most of them featuring BIG creatures of one kind or another - Earth vs. The Spider, Beginning Of The End, The Amazing Colossal Man, War Of The Colossal Beast, Attack Of The Puppet People, and on and on. His early films were made at a time when movie going was fun - weekly double bills, shlock and classics playing side by side - a giddy time for audiences and filmmakers alike.

After some lean years in the early 1970s, during which movie tastes had changed, in 1976 Mr. BIG hit it BIG with Food Of The Gods, a movie filled with a plethora of giant critters. The film did well enough at the box-office that the following year Mr. BIG was back with Empire Of The Ants, a deliriously wacky film about giant ants run amok - seeing those two films was like taking a trip back in time to another era.

For the score, Mr. BIG hired a young composer who was just starting out, Dana Kaproff. Kaproff, who was 24, had begun working in TV, and Empire Of The Ants would be his first feature film score. Kaproff’s orchestral score is quite effective, using repeated hammering notes on the piano, along with mysterioso string writing, excellent giant mutant ant music, and, as with the film, there’s a sense of real spirit and fun to the score. Kaproff would go on to be a prolific composer for television and film, and some of his terrific work includes scores for hit TV shows such as Cagney and Lacey (many episodes), Falcon Crest, The Bionic Woman, Matlock, along with a whole slew of TV movies, plus such films as Sam Fuller’s The Big Red One, the classic chiller, When A Stranger Calls, The Golden Seal, and many others.

The CD is mastered from the original two-track stereo session masters and includes every note of music written for the film.

This release is limited to 1000 copies only.