THE CURSE OF DRACULA 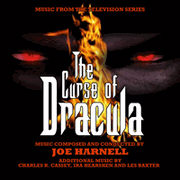 THE CURSE OF DRACULA, featuring music composed and conducted by Joe Harnell and additional music composed by Charles R. Cassey, Ira Hearshen and Les Baxter from the 1979 television anthology CLIFFHANGERS, written and directed by Kenneth Johnson (THE BIONIC MAN, THE INCREDIBLE HULK, V ? The Original Mini-Series) starring Michael Nouri (THE HIDDEN, FLASHDANCE, DAMAGES) as Count Dracula, along with Stephen Johnson and Carol Baxter.

Written, produced and directed by television veteran Kenneth Johnson, THE CURSE OF DRACULA was one of three segments that played on the TV series CLIFFHANGERS in 1979. The show was inspired by and emulated the movie serials of the 1930s and 1940s. Under the umbrella title CLIFFHANGERS, three separate serialized made-for-TV movies would be told simultaneously, shown in separate 20-minute segments during each of the series? hour-long episodes. THE CURSE OF DRACULA was designed as an original horror serial starring Michael Nouri as Count Dracula, living undercover in modern day San Francisco, weary of immortality and seeking a woman to share a mortal life with.

To provide the music for CLIFFHANGERS, Kenneth Johnson turned to Joe Harnell, his longtime friend and collaborator, a relationship that includes fondly remembered television projects from the 1970s such as THE BIONIC WOMAN, THE INCREDIBLE HULK, V ? The Original Mini-Series and ALIEN NATION. Harnell's gift for melody had been honed during the 1950s as a pianist and music director for such popular singers as Marlene Dietrich, Judy Garland, and Peggy Lee. He turned to writing advertising jingles in New York during the 1960s and became the musical director of THE MIKE DOUGLAS SHOW in 1969. Harnell was also a successful easy listening composer and arranger, releasing nearly 20 record albums. Joe Harnell has been nominated for an Emmy Award on three occasions for Best Dramatic Score. During his career, Harnell composed over 400 hours of original music for motion pictures and television. His scores for THE BIONIC WOMAN and THE INCREDIBLE HULK heavily influenced the scoring of all Universal television programs in the late 1970's. His scores used a traditional orchestral approach (influenced by his Jazz roots) using a 32 piece orchestra. He frequently conducted scores from the piano during recording sessions and he performed all the piano and keyboard solos in all of his scores.

Harnell gave CLIFFHANGERS its signature main and end title music, composed the main themes for each of the individual serials, and wrote the music for the first two chapters of THE CURSE OF DRACULA. Composer Les Baxter, noted for his work for Roger Corman and American International Pictures during the 1950s and 1960s, also came on board to score five episodes. With Baxter and Harnell as the series? primary composers, others came in to assist when deadline pressure became too great. Chicago-born Charles R. Cassey, who had contributed scores to NBC's MRS. COLOMBO and THE INCREDIBLE HULK, composed CLIFFHANGER's fourth episode. Ira Hearshen, who would become a veteran orchestrator for feature films had come in to assist Harnell with orchestration on both INCREDIBLE HULK and CLIFFHANGER shows and was asked to write the score for the show's sixth and eight episodes. Recorded on the Universal scoring stage, the music for THE CURSE OF DRACULA was chiefly orchestral, performed by a small-sized ensemble but orchestrated in such a way to sound reasonably rich and full.

joeharnell.com presents the original television soundtrack recording to THE CURSE OF DRACULA, mastered by Digital Outland, with liner notes by author Randall Larson. An early compact disc release of Joe Harnell's music included a short suite from THE CURSE OF DRACULA but this release contains all the music composed for the anthology segment for the first time, presented on 2 CDs, in loving memory of composers Joe Harnell and Les Baxter. THE CURSE OF DRACULA is an Exclusive joeharnell.com release, mastered by Digital Outland, factory manufactured and limited to 1000 units.