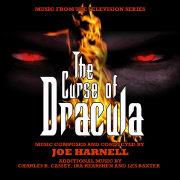 Airing on May 5th, 1977, ONCE A THIEF was the second season finale, the twenty fourth episode of the season. Veteran character actor Elisha Cook plays Inky, a hapless crook who has the good fortune to film Jaime while she is using her bionic abilities in action. Inky threatens to release the film to the press if Jaime doesn't help him rob a bank. Oscar encourages her to go along with Inky's plan so he can arrest him and use him to uncover a larger criminal organization. The musical demands for this episode allowed Joe to show off his more playful side, including a comical motif for Inky's pet monkey who ultimately helps save the day.

Broadcast on February 2nd, 1977, DEADLY RINGER was the seventeenth episode in the second season of THE BIONIC WOMAN and the story was told in two parts. Returning from 'Mirror Image', a first season episode, is Lisa Galloway, a woman who underwent plastic surgery and special training to become Jaime's double in every way except her bionics. In this episode, Lisa breaks out of prison and with THE LIBERATORS, featuring music composed and conducted by Joe Harnell for the 1987 period adventure film written and directed by Kenneth Johnson (THE BIONIC MAN, THE INCREDIBLE HULK, V - The Original Mini-Series) and starring Robert Carradine, Larry B. Scott, James Mainprize, Ken Pogue, Denis Forest, Renee Jones, Lorena Gale, Barbara Eve Harris, Caryn Ward, Bumper Robinson and Tonya Lee Williams.

Written, produced and directed by television veteran Kenneth Johnson, THE LIBERATORS tells the fact based story of John Fairfield (Carradine) and Billy Jackson (Scott) and their pre-Civil War adventures helping slaves escape their persecution in the South to find their freedom in the North, with the assistance of Levi Coffin (Mainprize) and the Underground Railroad. A mixture of sober drama, light comedy and adventure, THE LIBERATORS was a very ambitious project for its day and not the usual programming for an early Sunday evening.

THE LIBERATORS originally aired on February 8th, 1987. Since its broadcast, THE LIBERATORS has become something of a lost film, never earning a release on home video in the United States or any other part of the world.

To provide music for THE LIBERATORS, Kenneth Johnson turned to Joe Harnell, his longtime friend and collaborator. THE LIBERATORS provided Joe with an opportunity to score a more dramatic film, after years of scoring genre television shows like THE BIONIC WOMAN and THE INCREDIBLE HULK. In addition to writing the film’s underscore, THE LIBERATORS also gave Joe a chance to use his musical knowledge and record new versions of several traditional Southern songs that would have been well known during the time period in which the film is set. The film’s title sequence uses one of these songs, foregoing the tradition of using a piece of traditional underscore.

THE LIBERATORS features music composed and conducted by Joe Harnell, continuing his successful creative collaboration with Writer/Director/Producer Kenneth Johnson, a relationship that includes fondly remembered television projects from the 1970s such as THE INCREDIBLE HULK, HOT PURSUIT, CLIFFHANGERS, V - The Original Mini-Series and ALIEN NATION. Joe Harnell has been nominated for an Emmy Award on three occasions for Best Dramatic Score. During his career, Harnell composed over 400 hours of original music for motion pictures and television. His scores for THE BIONIC WOMAN and THE INCREDIBLE HULK heavily influenced the scoring of all Universal television programs in the late 1970’s. His scores used a traditional orchestral approach (influenced by his Jazz roots) using a 32 piece orchestra. He frequently conducted scores from the piano during recording sessions and he performed all the piano and keyboard solos in all of his scores.

The original television soundtrack recording to THE LIBERATORS in loving memory of the great Joe Harnell. THE LIBERATORS is professionally mastered by Digital Outland, factory manufactured and limited to 500 units.