BIONIC WOMAN, The: ONCE A THIEF / DEADLY RINGER / BIONIC BEAUTY 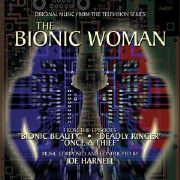 Airing on May 5th, 1977, ONCE A THIEF was the second season finale, the twenty fourth episode of the season. Veteran character actor Elisha Cook plays Inky, a hapless crook who has the good fortune to film Jaime while she is using her bionic abilities in action. Inky threatens to release the film to the press if Jaime doesn't help him rob a bank. Oscar encourages her to go along with Inky's plan so he can arrest him and use him to uncover a larger criminal organization. The musical demands for this episode allowed Joe to show off his more playful side, including a comical motif for Inky's pet monkey who ultimately helps save the day.

Broadcast on February 2nd, 1977, DEADLY RINGER was the seventeenth episode in the second season of THE BIONIC WOMAN and the story was told in two parts. Returning from 'Mirror Image', a first season episode, is Lisa Galloway, a woman who underwent plastic surgery and special training to become Jaime's double in every way except her bionics. In this episode, Lisa breaks out of prison and with the help of Dr. Courtney and other enemy agents, Jaime is locked up in her place. With Jaime imprisoned, Lisa is able to step back into Jaime's life, which includes access to OSI. Dr. Courtney believes that Jaime's strength is the result of a drug developed by Rudy Wells called Adrenalizine and gives Lisa the task of retrieving it. Hungry for Jaime's power, Lisa instead keeps the drug for herself and starts using it. As Jaime struggles to get out of prison and convince her friends of her real identity, Lisa becomes addicted to the Adrenalizine and begins to lose her grip on reality. After convincing Oscar and getting released from jail, Jaime is able to stop Lisa and get her admitted to a hospital for treatment. For her work in this two part episode, Lindsay Wagner received an Emmy for Outstanding Lead Actress In A Drama Series. In this episode, Joe was able to display his skill at quickly writing music in different styles, switching gears between bright, optimistic music for Lisa as she finds herself settling into Jaime's life of family and friends and then darker atonal music augmented by electronics as Lisa slowly loses her grip on reality because of her addiction.

Airing on March 3rd, 1976, BIONIC BEAUTY was the fourteenth episode in the first season of THE BIONIC WOMAN. Oscar Goldman enters Jaime in the Miss United States pageant in order to uncover an espionage operation that may endanger American security operations around the world. The perpetrators are planning to use the pageant as a cover while they attempt to smuggle out an important computer circuit that was recently stolen. The contest has been rigged so that Miss Florida will win, allowing her to smuggle the circuit out of the country. Jaime's identity is discovered, though, and she is instead made the winner of the pageant, allowing the enemy agents to kidnap her. But Jaime strikes back and is able to expose them and recover the circuit. This episode allowed Joe the opportunity to show off his master skills as an arranger, writing source music for the pageant while simultaneously finding ways to weave in his main theme for Jaime. In addition to score and source music, Joe also produced the song for the episode, called Time Changes as well as a cover version of Morris Albert's popular song, Feelings, sung by Lindsay Wagner herself.

THE BIONIC WOMAN: ONCE A THIEF / DEADLY RINGER / BIONIC BEAUTY features music composed and conducted by Joe Harnell, continuing his successful creative collaboration with Writer/Director/Producer Kenneth Johnson, a relationship that includes fondly remembered television projects such as THE INCREDIBLE HULK, HOT PURSUIT, CLIFFHANGERS, V - The Original Mini-Series and ALIEN NATION. Joe Harnell has been nominated for an Emmy Award on three occasions for Best Dramatic Score. During his career, Harnell composed over 400 hours of original music for motion pictures and television. His scores for THE BIONIC WOMAN and THE INCREDIBLE HULK heavily influenced the scoring of all Universal television programs in the late 1970's. His scores used a traditional orchestral approach (influenced by his Jazz roots) using a 32 piece orchestra. He frequently conducted scores from the piano during recording sessions and he performed all the piano and keyboard solos in all of his scores.

The original television soundtrack recording to THE BIONIC WOMAN: ONCE A THIEF / DEADLY RINGER / BIONIC BEAUTY in loving memory of the great Joe Harnell. Professionally mastered by Digital Outland, factory manufactured and limited to 1000 units.

In addition to Joe's wonderful score for these three episodes of THE BIONIC WOMAN, this release includes a new recording of Jerry Fielding's title music for THE BIONIC WOMAN, produced and arranged by Dominik Hauser, with trumpet by the legendary Roy Wiegand and drums by the great Kurt Walther.