INCREDIBLE HULK, The: THE FIRST -Parts 1 and 2 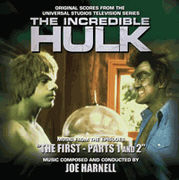 THE INCREDIBLE HULK: THE FIRST PARTS I & II, featuring music composed and conducted by Joe Harnell for the cult television show, THE INCREDIBLE HULK, created and developed by Kenneth Johnson (THE BIONIC MAN, THE BIONIC WOMAN, V) and starring Bill Bixby as David Bruce Banner and Lou Ferrigno as his green-skinned, purple-panted living ID, along with Jack Colvin as Banner’s nemesis, journalist Jack McGee.

THE FIRST was a two part episode that aired during the show’s Fourth Season, in 1981. The story begins with David Banner discovering that he was not the first person to study the effects of gamma radiation on human beings and that another man had done so thirty years before. In this case, Dr. Jeffrey Clive used gamma radiation to heal a man who was in poor health. This man, Del Frye, had become embittered from being constantly bullied by the local townspeople. Because of his mental state, the creature that was created from his exposure to gamma rays was different from Banner and the Hulk, more aggressive. It actually killed people. Dr. Clive, long dead, had actually discovered a cure for Frye’s condition and successfully treated him. But Frye, now old and weak, and still bullied by the townspeople, wants to have the power again. Discovering Clive’s laboratory, David finds a machine that is capable of harnessing gamma radiation from the sun. In order for Clive’s cure to work, David must take it and bombard himself with gamma radiation from the machine. Before he can continue, though, Frye knocks him unconscious and straps himself to the machine, exposing himself to the gamma rays and unleashing the dangerous creature from the past. After a murderous rampage through town, David is able to subdue Frye and get him back to the machine to cure him. Sensing what David is trying to do, Frye transforms again and destroys the last vial of Clive’s cure. Distraught by the loss of a cure for his condition, David changes into the Hulk and the two creatures fight. But David’s Hulk is more powerful and he is able to beat Frye, who is eventually shot dead by the town sheriff. Meant as an homage to the classic Universal Monsters films of the 1940s and 1950s, Joe used the opportunity to score THE FIRST in the style of those films.

THE INCREDIBLE HULK was a surprisingly popular television show that ran for five seasons on CBS, from 1978 to 1982 and returning again in the late 1980’s, in three more television films. Taking a page from Victor Hugo’s LES MISERABLES, the show chronicled the journey of scientist David Bruce Banner, wrongly accused of the murder of an associate in a lab explosion and doggedly pursued across the country by tabloid journalist Jack McGee and law enforcement, as he struggled to find some way to both prove his innocence and cure himself of the radiation-inspired accident that forced him to turn into the Hulk when provoked. Accompanying Banner on his travels was the music of veteran composer Joe Harnell, in particular, his Lonely Man theme, performed on solo piano, which would play out at the end of each episode as Banner, once again misunderstood and pushed aside by society despite his compassionate efforts to help his fellow Man, must take to the road and move on to the next town. Much of Joe’s music for the show had echoes of the Lonely Man theme in it, including a compelling and lyrical love theme and a well-remembered brassy horn motif that would inevitably culminate with the transformation of Banner into the Hulk. Few television shows are so strongly identified with a single theme and even now, decades later, the Lonely Man theme is fondly remembered by fans of the show, inextricably linked to the characters of Banner and the Hulk.

THE INCREDIBLE HULK: THE FIRST PARTS I & II features music composed and conducted by Joe Harnell, continuing Joe’s successful creative collaboration with Writer/Director/Producer Kenneth Johnson, a relationship that includes fondly remembered television projects such as THE BIONIC WOMAN, HOT PURSUIT, CLIFFHANGERS, V - The Original Mini-Series and ALIEN NATION. Joe Harnell has been nominated for an Emmy Award on three occasions for Best Dramatic Score. During his career, Harnell composed over 400 hours of original music for motion pictures and television. His scores for THE BIONIC WOMAN and THE INCREDIBLE HULK heavily influenced the scoring of all Universal television programs in the late 1970’s. His scores used a traditional orchestral approach (influenced by his Jazz roots) using a 32 piece orchestra. He frequently conducted scores from the piano during recording sessions and he performed all the piano and keyboard solos in all of his scores.