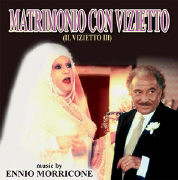 MATRIMONIO CON VIZIETTO (IL VIZIETTO III) (aka LA CAGE AU FOLLES 3 - ELLES SE MARIENT) is a comedy movie directed in 1985 by Georges Lautner and starring Ugo Tognazzi, Michel Serrault, Antonella Interlenghi, Saverio Vallone, Michel Galabru, Benny Luke, Umberto Raho, Gianluca Favilla, Stephane Audran, Pierfrancesco Aiello, Fabio Albanesi, Nunzio Altobelli, Roberto Posse, Cesare Nizzica, Flora Carabella. Renato and Albin continue to live together after many years of love relationship. The homosexual couple manages LA CAGE AUX FOLLES, a restaurant cabaret in Saint Tropez, where Albin performs in a dance in the funny shoes of a queen bee with wings. But the business is not going very well. Luckily Albinreceives a letter from Scotland, that informs he inherited an immense landed property, a beautiful castleand a bunch of pounds left to him by a rich uncle. He left for Scotland, where, however, learned with anguish the contents of a clause: should marry and have an heir, or else everything will fall into Mortimer,a young cousin who has meanwhile been informed. Returned to Saint Tropez, Albin hides the news to his partner, but Renato discovers the will and the prospect of all that money, just as the bank account is in the red, gets a big head. The matter must be properly settled. Following a car accident, the two become acquainted with Cindy (Interlenghi), a single mother that has been left by the lover, and Renato thinks that he had found the ideal solution. Albin at first is cautious, then persuades himself, although the pleasant presence of the girl threatens to ruin the longstanding relationships. But on the wedding day here's the twist: Albin show up to the mayor of Saint Tropez in white dress with lots of tulle on the head. Luckily Mortimer had fell in love with Cindy and will marry her. She will become the Duchess and the heritage will be divided into two equal parts, so that everyone can enjoy. Ennio Morricone wrote such a brilliant score to sign, for the third time, the music for the final chapter of the trilogy. The Maestro alternates aromantic theme (presented in two different vocal versions) to cheerful and carefree motifs,in tune with the nice protagonist couple. The recordings on this CD, complete edition of almost 54 minutes, originates from the master tapes of the original album and the first generation stereo master tapes of the recording session properly restored and digitally re-mastered.